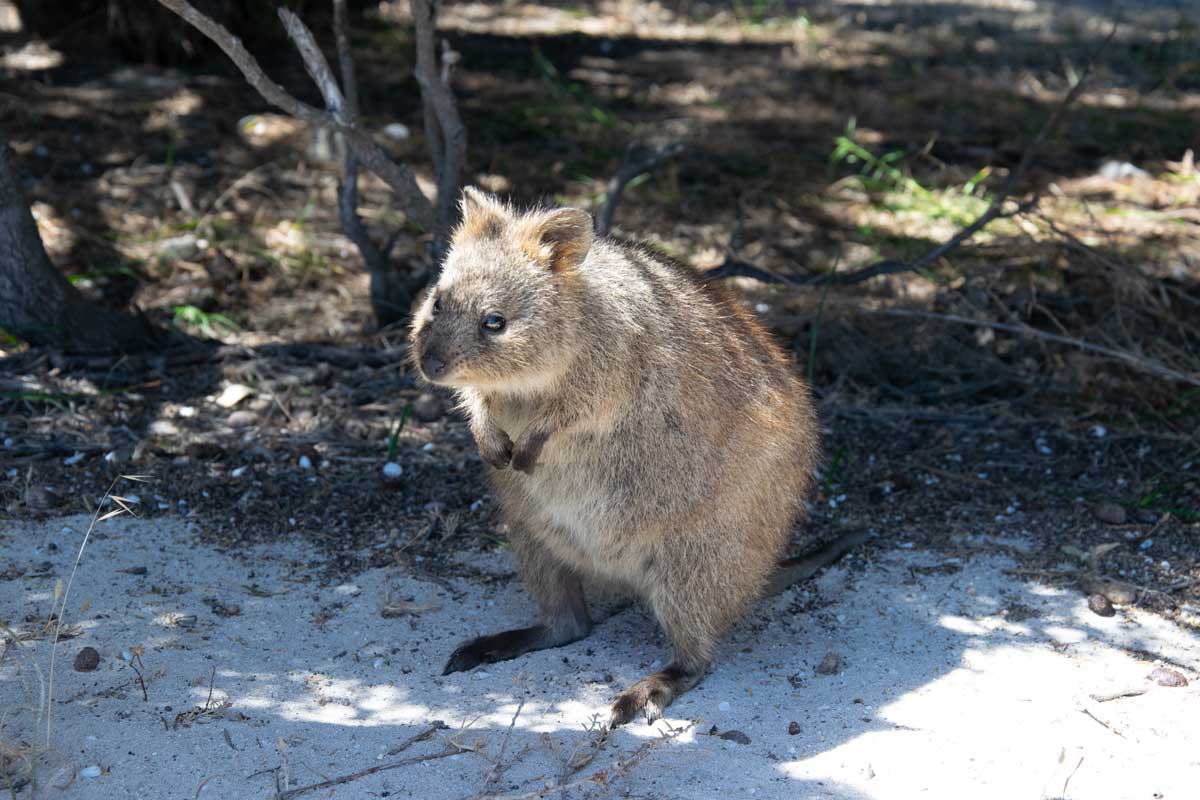 A friend of mine recently asked me: Marc, are quokkas real?

Quokkas look so cute and adorable, so you might think it’s too good to be true. But I can assure you: Quokkas are real animals! They are marsupials (that’s why they are related to kangaroos) that live in just a few places in Western Australia. The largest number of quokkas occurs on Rottnest Island near Perth in Western Australia.

I Want To See Quokkas, Where Do I Have To Go?

That’s a good question. While you can see kangaroos almost everywhere in Australia, you won’t find quokkas easily.

If you want to see quokkas you have to go to Western Australia. Your flight will most probably take you to Perth, the capital and largest city of Western Australia, then you’re really close to the biggest quokka population. Most tourists go to Rottnest Island which is an island just offshore from Perth.

Then my friend asked me: Marc, would you recommend going to Rottnest Island to see quokkas?

The answer is short and simple: Hell yeah! In my opinion, Rottnest Island is one of the best places you can visit in Australia. The beaches are absolutely beautiful, you can rent a bike and explore the whole island. I’d recommend you to stay there for at least two nights. We’ve been to Rottnest Island for one day and we couldn’t see everything. 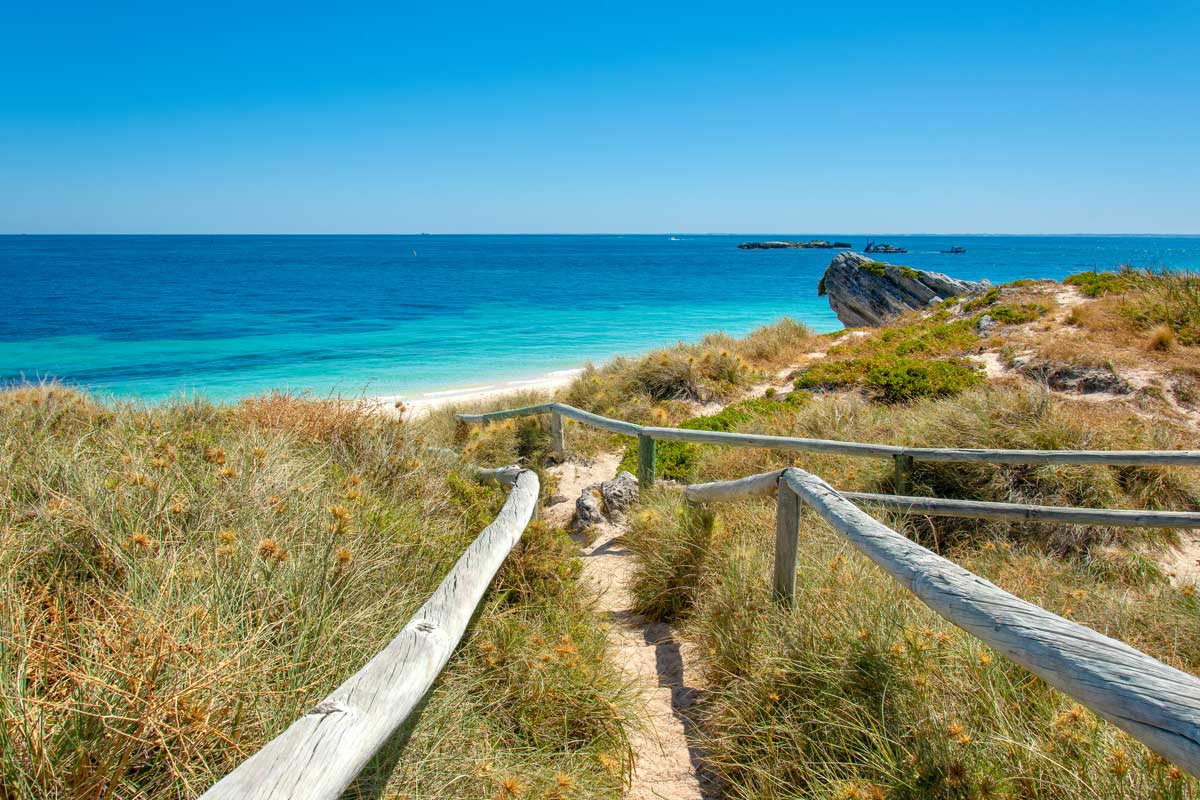 Rottnest Island is home to the largest wild quokka population on earth. Approximately 8000 - 12000 quokkas live on this beautiful island so it’s easy to see one.

Because quokkas are nocturnal and crepuscular animals, you will see a lot more of them in the late afternoon. When we arrived at Rottnest Island in the morning we hardly saw any of them. We then got our bikes and occasionally saw some quokkas under the bushes in the shade. We had a perfect day and when we arrived at the main settlement to take the ferry back to Fremantle there were quokkas everywhere. It was just an hour before sunset and quokkas were everywhere. It totally changed considering the fact that we hardly saw any quokkas in the morning. Many quokkas on Rottnest Island are extremely tame. However, you’re not allowed to touch and feed them! Quokkas don’t have many predators on Rottnest Island, that’s why the population is quite big. Snakes, however, are the only real predators to quokkas.

The best places to see wild quokkas on Rottnest Island:

Are there Quokkas on Kangaroo Island?

Quokkas On The Mainland

There are some quokkas that actually live on mainland Australia. There are more than 25 sites but most quokka colonies are extremely small so it’s hard to find them. They live in forests with dense vegetation on the ground but they create runways that makes moving on the ground much easier. These animals are only found in the south-west of Western Australia.

Living on the mainland is not easy. They prefer certain areas where bushfires occurred less than 25 years ago. They prefer a combination of recently burnt areas where they can find food and areas with dense vegetation that provide shelter.

This is where mainland quokkas can be found:

Quokkas are macropods, just like kangaroos, wallabies, and wallaroos. They are a different genus, though. Quokkas are the only member of their Setonix genus, whereas various kangaroos and wallabies have more members in their genera.

This table shows the members of the most common kangaroo genera, whereas there’s only one Setonix (Quokka). Both kangaroos and quokkas belong to the Macropodinae family. That’s why quokkas are related to kangaroos, they are not the same, though.

Quokkas are nocturnal and crepuscular animals. That means they are most active between the late afternoon and sunrise.

Are Quokkas Related to Koalas?

Quokkas and koalas live in different regions. Quokkas are only found in a few places in Western Australia whereas most koalas live on Australia’s east coast.

Quokkas love eating young foliage, native herbs and grasses. They eat many types of vegetation. Their food habits are similar to those of kangaroos and scientists found out that “Guichenotia ledifolia”, a small shrub, is the favorite food of the quokka. Please keep in mind that it’s not allowed to feed quokkas.

Quokkas need a lot of water. Whereas their relatives the kangaroos do not need much water, the quokka heavily relies on good water supply. That means the quokka’s natural habitat is often close to freshwater sources that are available throughout the year. They are often found in swampland, places where water is collected.

A quokka uses its tail to store fat in it, that means it can survive without food for a few days.

How a Young Quokka Is Born The reproduction of quokkas is actually similar to kangaroos. Quokkas are marsupials which means a young called joey grows up in its mother's pouch.

Let’s start with the basics.

There is a difference in breeding behavior between Rottnest Island quokkas and mainland quokkas:

When do Quokka Joeys Leave The Pouch?

A joey leaves its mother's pouch after about 24 to 28 weeks. They continue to suckle for another 8 weeks until they leave the pouch for good and become independent.

Do Quokkas Throw Their Babies?

I couldn’t believe it but quokkas actually do something similar to that. They don’t throw their babies, but they can eject it from the pouch and leave it behind if being followed by a predator. That actually makes sense because it’s a good strategy that helps them to survive. Whereas their close relatives the kangaroos are skilled fighters, quokkas do not really fight. The idea is that predators get distracted by the young quokka and the mother is able to escape. Due to this instinct, a mother does sacrifice her young but if the mother got caught she and her joey won’t make it.

Quokkas Are An Endangered Species

Quokkas are, unfortunately, an endangered species. There are just a few thousand of them living on this planet and that’s why quokkas might be going to extinct. It is believed that less than 20000 quokkas are left in the wild.

Their habitat got smaller and smaller once European settlement began. Before, quokkas were widely distributed across the south-west of Western Australia. Additionally, the predation by foxes and cats further reduced the quokka population.

Quokkas are listed as vulnerable species - “rare or likely to become extinct”.

These are the main reasons why quokkas are a threatened species:

Most quokkas live in family groups.

Quokkas move and hop similar to kangaroos. They use their strong tail as a third leg and distribute their weight onto their forelimbs and tail when they drag their hind legs forward. Read this article on kangaroo movement if you’re interested in kangaroos and quokkas.

Quokkas are definitely not a threat to humans. In fact, it might be the other way round. These tiny little creatures weigh up to 3.6 kg and have a total length of less than half a meter. They are peaceful and curious animals.

Some Say Quokkas Are The Happiest Animals In The World

The world’s happiest animal is actually the quokka. You’ll believe that as soon as you see a quokka. It looks like they’re smiling and they’re so super cute you just have to think they’re happy animals - they are happy and curious at the same time. They often actively hop toward people.

Snapping a quokka selfie is a popular activity among Rottnest Island visitors, would you do the same?