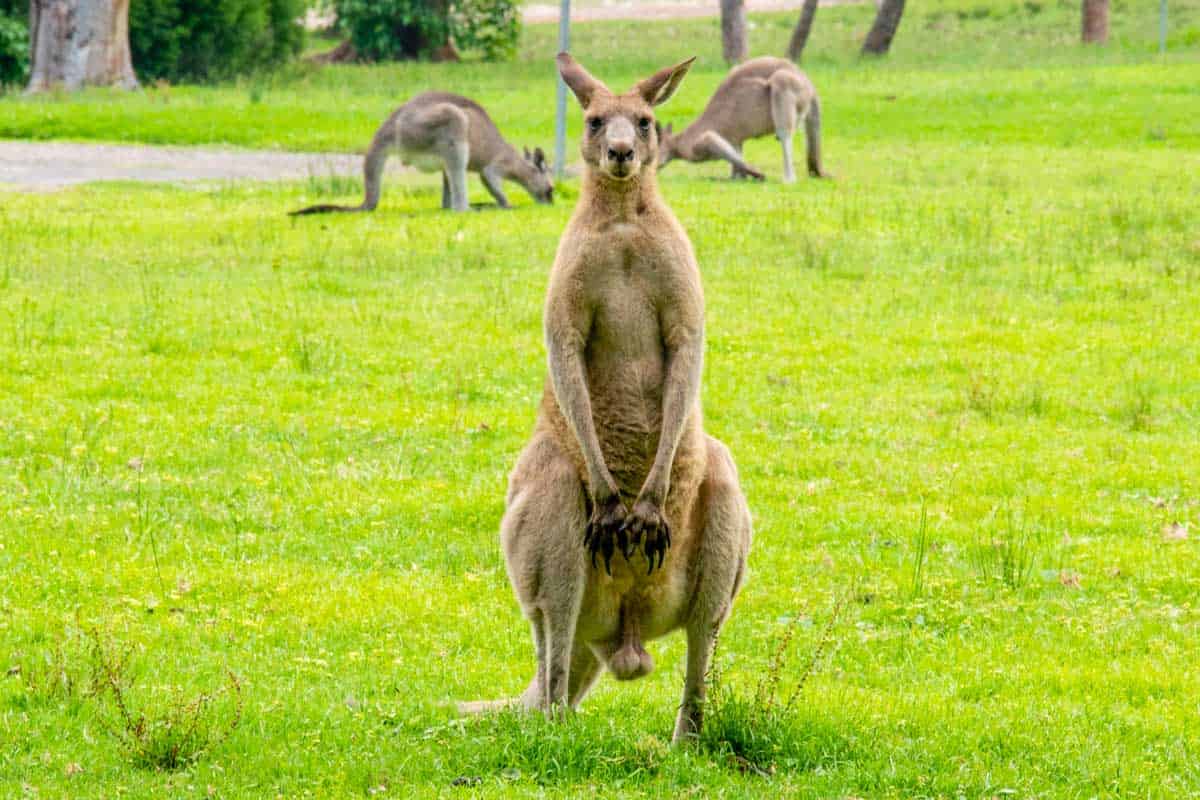 Kangaroo boxing and kangaroo fighting play an important role in a kangaroo’s everyday life. As soon as a kangaroo leaves its mother’s pouch there’s no time to lose to learn the most valuable skills. Young kangaroos box playfully, later on, their fighting skills determine whether kangaroos can survive in the wild and whether a male kangaroo gets the chance to become the father of a joey. How do kangaroos fight?

Kangaroos use their strong tail and hind legs to stand up and fight. When they are in an upright position, kangaroos start the fight by grasping the neck of the other kangaroo with their forepaws. In this high-standing posture, kangaroos extend their claws and wrestle. They paw their opponent's chest, neck, shoulder and head. Some kangaroos then balance on their tail and kick the opponent’s abdomen with their hind legs.

Why do kangaroos fight?

This is why kangaroos fight:

Young kangaroos fight playfully, but the older they get the more serious the fights become.

There are two main reasons why kangaroos fight: They either box for access to females and clear up their rank in the hierarchy, or fight against enemies.

Play fighting is a non-violent activity between two kangaroos. Typically, the mother and her joey grasp each other around the neck and grapple. The joey may kick her mother and the animals touch their forepaws. Play fighting is used as a training to prepare the joey for life as an adult and is started by either the mother or the young.

This is When Fights Get Serious

A joey’s mother prepares her young for life as an adult. In the wild, kangaroos fight for their lives. Limited water supply, personal space, and predators are good reasons to learn how to fight.

Researchers at Fowlers Gap Research Station in Western New South Wales studied the fighting behavior of red kangaroos and euros (a sub-species of the common wallaroo).

The researchers found out that most fights, and aggressive behavior in general, happen because kangaroos wanted a nice place to lie down in the shade, followed by a lack of personal space.

They push their unloved colleagues off a cliff

Euros spend their days in small caves when it’s hot and sunny outside. Fighting for the best places in the shade in caves or rock overhangs is one of the main reasons why they start a fight. Euros value their personal space and dislike sharing caves. They accept distances up to one meter, but fights for the best places in the shade tend to get very dangerously. It was reported that some euros even pushed another euro off a cliff.

Euros make exceptions, though. Researchers reported large amounts of euros in a tiny cave where they had literally no personal space. This happened on an extremely hot day.

Kangaroos Fight for Their Water

Many kangaroo species live in areas where the availability of water is scarce. They, therefore, fight for access to water. That’s why female kangaroos are also involved in these fights. They do not only fight against other kangaroos but they also attack or defend themselves from attacks of other animals that need water.

As you’ve seen, kangaroos are serious fighters. They can even take other animals in a chokehold - and they’re good at it. They do that with other kangaroos and with other animals, for example dogs. Another method to get rid of their opponents is to drag them underwater so they drown. Kangaroos can use their tail and hind legs to get into a standing posture while they hold their enemy underwater.

What is Kangaroo Boxing?

Ritualized boxing fights are rare in the wild. Often smaller male kangaroos want to start a fight but the larger dominant male couldn’t be bothered. The clearly dominant kangaroo usually just walks away.

It’s not easy to determine what kangaroo is showing a submissive behavior. Noticing a change in a kangaroos posture or head or ear position is hard for humans.

Some species such as the eastern grey kangaroos and wallaroos make a coughing-noise to display their submissive position within the group. Other species, however, do not make those coughing noises. The red kangaroo, for example, does not make coughing noises to show submission.

How do male kangaroos initiate a boxing fight?

Male kangaroos can initiate boxing fights out of the blue.

They could be standing or grazing next to each other, and all of a sudden one rears up and hits the opponent. During these fights, the heads are thrown back to protect the eyes. This is because kangaroos extend the claws of their forepaws and that could dangerously injure the other animal.

Initiating a boxing fight out of the blue is definitely not typical of kangaroos. Kangaroos signal their willingness to fight by subtly scratching and grooming their chests. Sometimes just the way they pull up grass signals what they’re up to. Hence, for humans, it’s hard to understand when kangaroos want to start a ritualized boxing fight.

Watch Kangaroos Fighting on the Streets in Australia

In remote areas, kangaroos and humans live next to each other. That’s where you could witness a kangaroo boxing fight:

Do Kangaroos Fight to the Death?

As soon as one of them breaks off the fight and retreats the fight is over.

Can a fight lead to death?

In captivity, fights can end with the death of one kangaroo. This is because there’s no place for a kangaroo to retreat and so there’s no way of ending a fight “peacefully”.

The winner is who is able to stand the fight. The weaker animal breaks off the fight and must retreat, typically the stronger animal can push the opponent down to the ground. Surprisingly, it was observed that losing kangaroos tends to kick more often.

Kangaroos do know what they’re doing. The dominant male denies the request to fight when he’s obviously stronger. However, the kangaroo that initiates the fight typically wins. The stronger kangaroo tries to push the other kangaroo down to the ground or have it in a chokehold.

Where do kangaroos fight?

Kangaroos fight wherever they want. That could be:

Are Wild Kangaroos Dangerous and Do They Attack Humans? 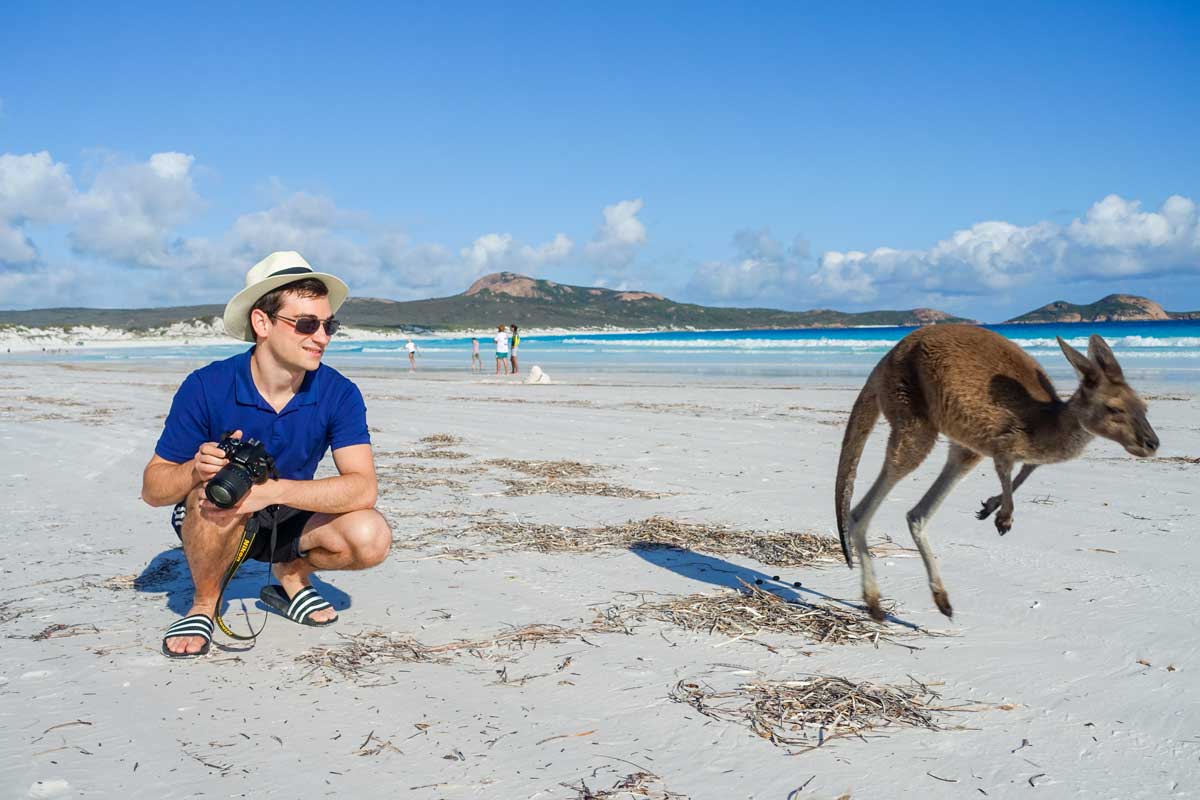 I’ve never felt unsafe when I was close to a kangaroo. But I always gave the kangaroo some personal space and never tried to touch it. However, being close to wild animals creates potentially dangerous situations.

Kangaroos are shy by nature and they’ll hop away as soon as they see us. In certain areas where kangaroos are used to seeing humans they won’t hop away. This happens in many national parks where people feed kangaroos. You can get extremely close and they won’t fight you and in normal circumstances, kangaroos present no threat to humans. Kangaroos are, however, wild animals and you never know what happens next.

They usually don’t box, they kick instead. Those kicks are extremely powerful and can kill humans. Moreover, in a kangaroo fight, the kangaroo can use its claws to claw the opponent’s eyes out. That’s why it throws back its head: to protect the eyes.

Humans won’t be an issue, but kangaroos might see dogs as a potential enemy. Dogs look similar to dingoes that are predators. Kangaroos then try to wrestle down dogs to protect themselves.

Watch this man rescuing his dog and punching a kangaroo in the face:

There’s one main reason why kangaroos take the risk and enter boxing fights: privilege access to females. Kangaroo fights can get dangerous for both kangaroos and humans, so it’s a good idea to stay away from kangaroos that are fighting each other.

You’re in Sydney and really want to see kangaroos?