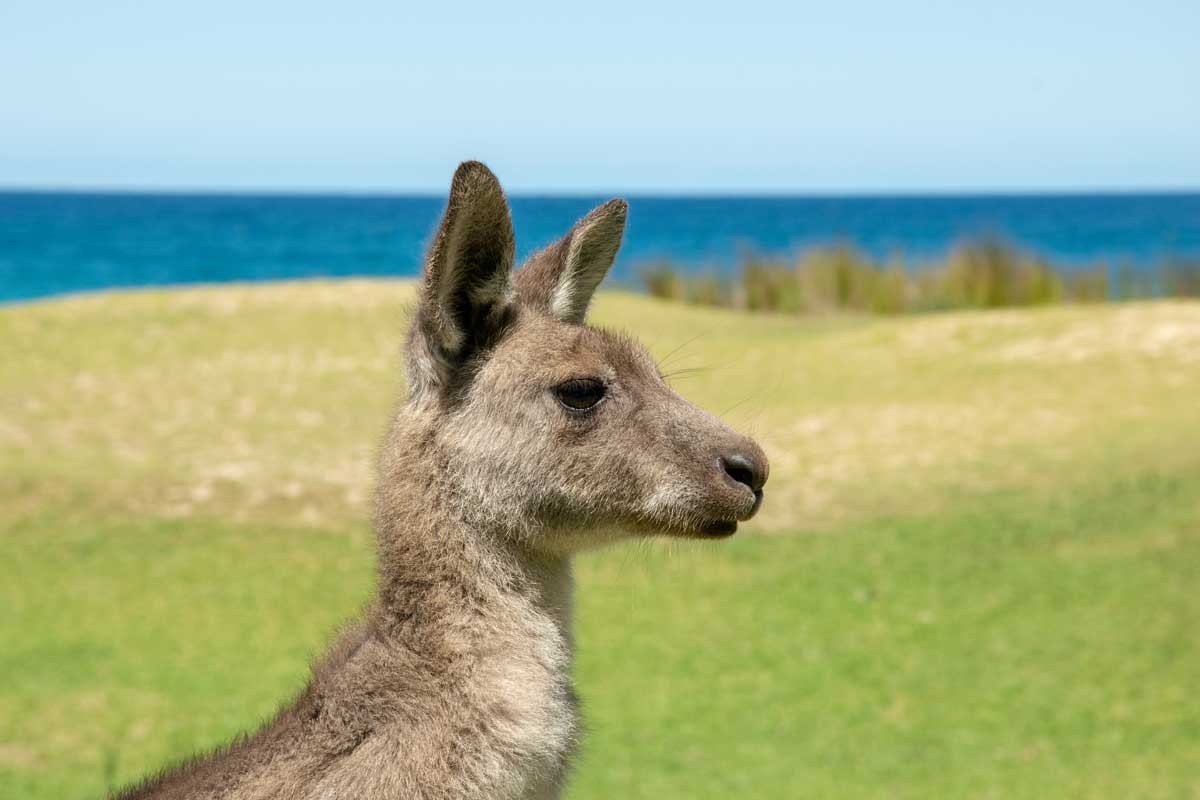 You probably know the feeling when you’re visiting a place for the first time in your life and you have no idea where to go. I wish I had these guides before I left Sydney to explore Australia so I wanna share with you the most amazing places where you can see wild kangaroos and wallabies near Sydney:

The Blue Mountains might not be the easiest place to see wild kangaroos, wallaroos or wallabies near Sydney. But it’s one of the most popular places, that’s for sure.

You’ll need a car to see kangaroos, wallabies, or wallaroos in the Blue Mountains, so using the cheap Sunday fare with your Opal card might not work.

The Blue Mountains and its best spot where you could see wild kangaroos are just about 80 km west of Sydney, it takes about one hour to get there. 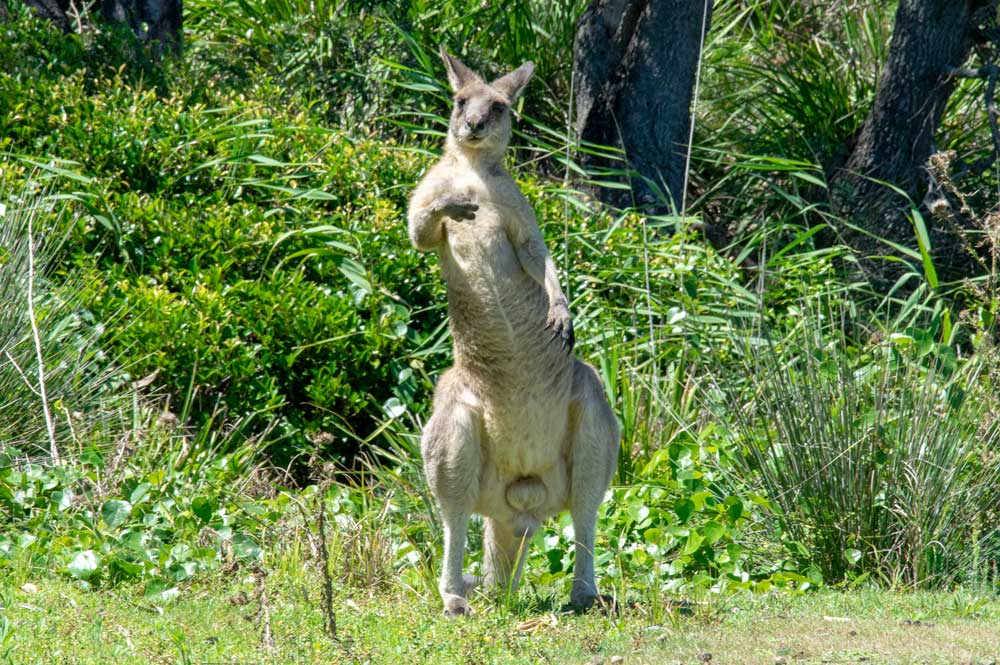 The Australian Botanic Gardens show its beauty on 416 hectares, so I’d recommend going to the visitor centre right in the heart of the garden to get a map and ask about the local wildlife. I’ve never been disappointed by asking for information at a local visitor centre.

The grassland at the entrance of the gardens is a great place to see eastern grey kangaroos grazing. The best time to see kangaroos is usually early in the morning or in the late afternoon.

There’s no entry fee and you can easily spend a day or two there. It’s not too far from Sydney, just about 60 km and it’s close to Hume Motorway. It takes about an hour from Sydney’s city centre to get there.

Hyams is probably the most popular beach in this area - I personally haven’t seen kangaroos on this beach but you might see eastern grey kangaroos at dusk and at dawn grazing on the lawn of the houses close to the beach.

Honeymoon bay is another popular spot to see kangaroos in the Jervis Bay area, especially near the campsite.

I’ve really enjoyed Booderee National Park and we saw kangaroos on our way back in the afternoon.

Another tip to see kangaroos in the Jervis Bay area is to get accommodation next to the golf course. Golf courses are, in general, the perfect place to see wild kangaroos. Kangaroos simply love the wide-open area where they can graze in the late afternoon or early morning. You could check-in at Golf View Motel in St George’s Basin that is located right next to the golf course.

Bayley Point and Kioloa are just a few kilometers north of Murramarang National Park and it’s an area with lots of kangaroos. I was spending a beautiful day on Merry Beach and on my way back to the apartment I couldn't believe the sheer amount of kangaroos feeding on the grasslands next to the street.

So go and grab your swimsuit and spend a nice day on the beach and see a bunch of eastern grey kangaroos on the way back home.

If you start in Sydney it’s a 250 km drive south, which should take at least 3h 30 minutes until you’ve arrived at your destination in Kioloa.

Pebbly Beach, Depot Beach and Pretty Beach are my favorite places to see kangaroos on the beach. I’ve been there a couple of times and I always was fortunate to see some kangaroos. Many wild kangaroos at Murramarang National Park are used to seeing visitors so they are quite tame there.

Once again, the best time to see kangaroos is either early in the morning at dawn or in the late afternoon. Then kangaroos move to the grasslands and start eating.

Murramarang National Park was the only national park where I had problems with the payment of the entry fee, though. My recommendation is to take enough coins with you. When I visited the national park the entry fee was $ 8 and payable with coins at a machine only.

It’s about 270 km south of Sydney which is a 3 and a half hours drive.

Kangaroos apparently love golf courses. Go to any golf course in Hunter Valley north of Sydney in the morning or in the evening and you might spot an eastern grey kangaroo grazing.

For example, there’s Hunter Valley Golf in Lovedale that is known for its kangaroo mob.

I was surprised to see kangaroo spotting tours that you can book, that’s probably the easiest and most comfortable way to see kangaroos in the wild near Sydney.

Lovedale and Pokolbin are the favorite towns where many visitors stay to see wild kangaroos.

The Hunter Valley is also one of Australia’s most famous wine regions, well-known for its food, and just about 2 hours and 170 km away from Sydney CBD. That makes it a great getaway destination from Sydney. 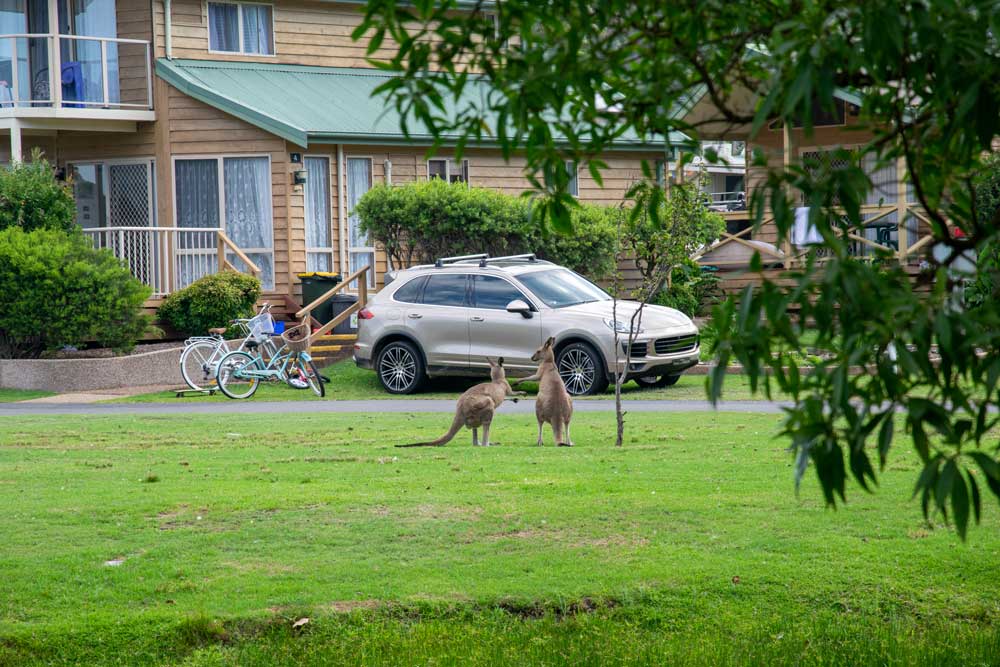 Stunning views, beautiful beaches, nice walks, and lots of wild kangaroos. You’ll find that near Sydney in the area of Tomaree National Park and Port Stephens.

Port Stephen’s golf courses are a great place to meet kangaroos, and it gets even better when you take their kangaroo tour with experienced wildlife experts.

It’s a great area for wildlife encounters, you might see wild kangaroos, wallabies, koalas, and birds.

Port Stephens and Tomaree National Park are north of Sydney and close to Newcastle, just about 180 km and 2 hours away from Sydney.

If you can’t find a golf course, go to campgrounds. Ku-ring-gai Chase National Park is extremely close to Sydney, so if you don’t have much time it’s a good idea to go there.

The Basin campground is the only place you can camp in this national park, but there is a lot of grassland around the campground. If you’re lucky and stay there for a few nights you might get really close to kangaroos or wallabies. They might even hop next to your tent.

If you choose to arrive by car you definitely have to walk. You can’t drive to The Basin campground, but you can take the ferry instead (which is recommended and a great experience). You can take the ferry from Palm Beach Wharf and leave your car at Careel Bay Sporting Fields.

If you really want to arrive by car, be prepared for a steep 2.8 km walk. It’s recommended to park at West Head Road car park.

You can travel north to Palm Beach Wharf by car from Sydney which takes about 50 minutes (40 km). Then, there’s a short ride on the ferry to The Basin campground.

A nice place to stay:

You maximize your chances to see wild kangaroos if you go there either early in the morning or in the late afternoon and go to places that are suitable for grazing (wide-open plains where grazing is possible). Wallabies are often found in bushy or forest areas, so you might see a swamp wallaby when you do one of the nice walks.

If you don’t know where you could see kangaroos in Cattai National Park, stick to the area near the campgrounds and go there at dawn or dusk.

Another place to see kangaroos in this area is Riverside Oaks Golf Resort which is next to Cattai National Park.

Cattai National Park is a perfect place to see wild kangaroos close to Sydney, it takes about one hour to get there from Sydney CBD (60km).

Locals told me the last few bushfires had a catastrophic effect on the kangaroo and wallaby population in the Royal National Park. They can be found, they are rarer though.

Royal National Park offers lots of other places to explore, and you might see a wallaby or kangaroo during your stay. Wallabies are sometimes found near Hacking River, whereas kangaroos prefer the open grassland at Era campground.

An alternative place, and closer to Sydney, is Bundeena in the Royal National Park. You can take the ferry to Bundeena if you don’t have a car.

The Royal National Park is south of Sydney, it took me about one hour (55 km) to get there from Sydney CBD (with the usual busy traffic).

Which Place Is Best For You?

The best places to see wild kangaroos close to Sydney:

But where should you go if you’re not near Sydney?

Australia is such a beautiful country, you will definitely go further away from Sydney to see more of the country’s beauty. That’s why I’ve written an entire article on my favorite places in Australia where you can see wild kangaroos.