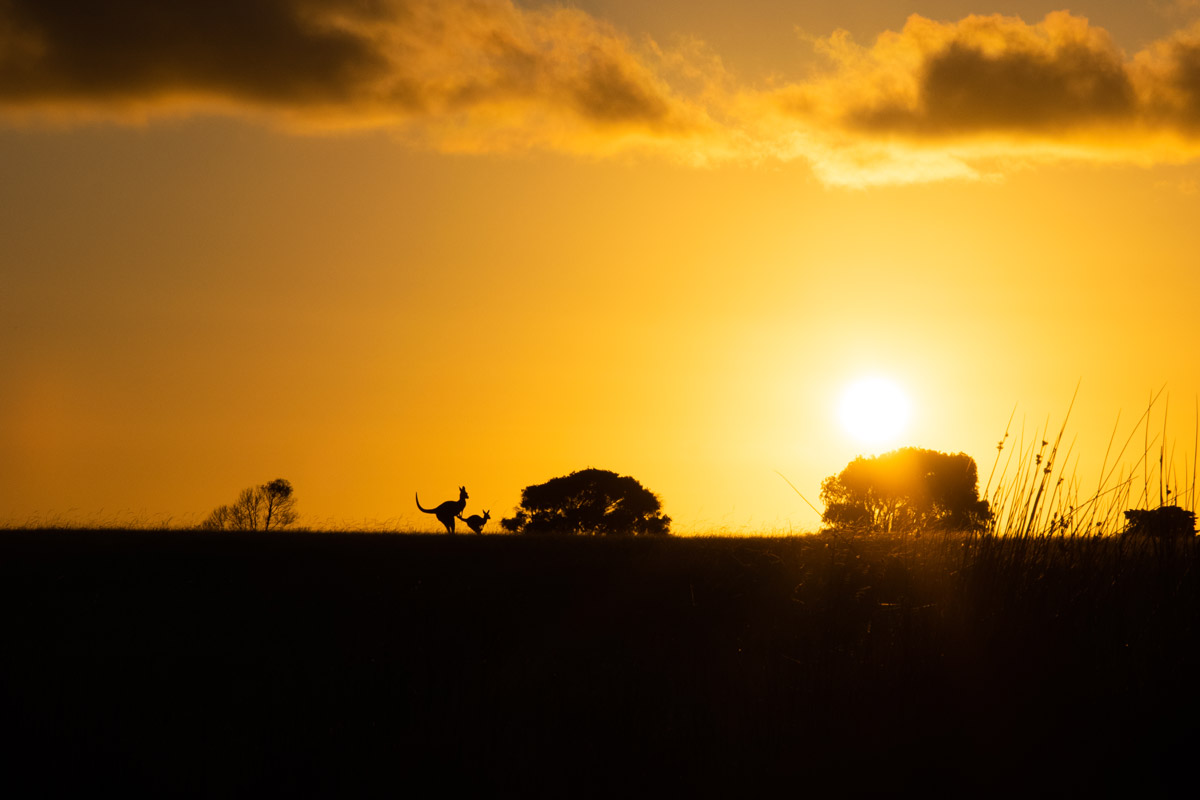 Everyone who sets a foot on Australian soil should experience the presence of Australia’s iconic kangaroos. The Australian’s even put a red kangaroo in their Coat of Arms, so you better take a look at a kangaroo in the wilderness. This article will show you the best places where you can find kangaroos in Australia.

The best places where you can see kangaroos in Australia are Murramarang National Park south of Sydney, Kangaroo Island southwest of Adelaide, and Cape Hillsborough National Park northwest of Brisbane. This article also includes more than seven other perfect places to see kangaroos.

Can You See Kangaroos In Australia?

I did the math and there are millions of kangaroos in Australia. But if you don’t know where you can find them, you will hardly see one. Especially if you’re living in one of the big cities it’s unrealistic that you will ever see a kangaroo there. Unless you live in Canberra, it’s the kangaroo capital.

Where I Saw Kangaroos In Australia

This is where I easily found lots of kangaroos in Australia: 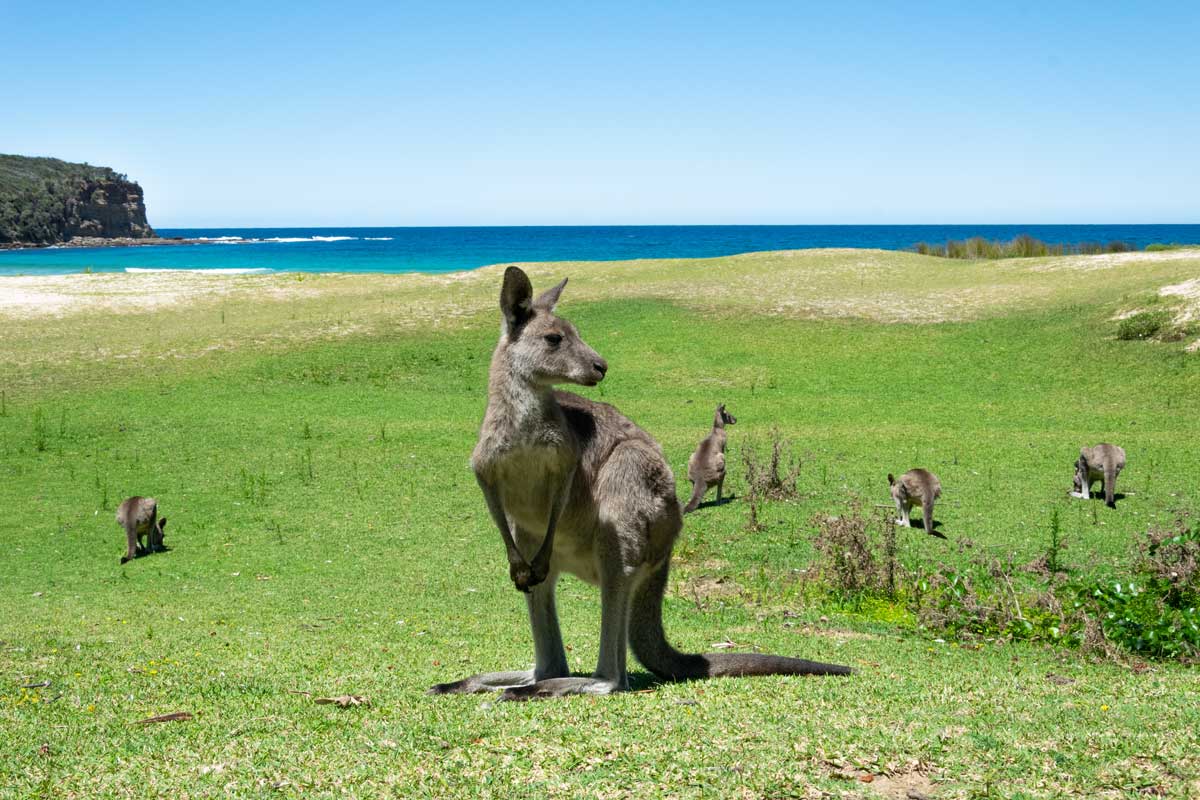 I’ve visited Australia and totally fell in love with its breathtaking nature and people. In my opinion, the easiest place to spot kangaroos in the wilderness is in New South Wales. When I explored New South Wales’ Murramarang National Park it was so easy to find kangaroos.

The first day I visited Murramarang National Park kangaroos were right next to the car park at Depot Beach. The other day, I could not find any kangaroos at Depot Beach but when I went to Pebbly Beach which is just a few kilometers away there were lots of kangaroos. Additionally, Durras North was a nice location so see some kangaroos next to the road hopping between front gardens.

This is a place where you can easily see hundreds of kangaroos grazing. But, like everything in life, this depends on your timing. If you’re going to Murramarang National Park at the wrong time, chances are good that you won’t see a kangaroo at all. This is because kangaroos, like its close relatives the wallabies and wallaroos, are a nocturnal species. This means that they are most active between sunset and sunrise. Click here to read my article on the differences between a kangaroo, a wallaby, and a wallaroo. During the day, the eastern grey kangaroos are hiding in the open forests where they seek shelter from the sun.

I love Murramarang National Park. Just don’t forget to take enough money with you to pay the national park entry fee. There is a coin-operated machine which was asking for $ 8 in coins. We’ve been to Murramarang National Park a few times but there was one day when the machine was broken and did not print the ticket. Unfortunately, we did not have another $ 8 in coins with us so we called the service line but it was a national holiday and nobody could really help us. Luckily, a Swiss couple who also wanted to pay the park entry fee lent us a pen to leave a note in our car that we paid. Thanks, guys!

Kangaroo Island is an incredible place if you’re into wildlife. It’s an island, though, so you have two options on getting there:

I bet you can imagine that you will see plenty of kangaroos hopping around at Kangaroo Island. About one-third of the island’s size is protected and gives wildlife plenty of space to roam around. Flinders Chase National Park is the go-to area if you wanna see wildlife like kangaroos. The kangaroo island kangaroo is a sub-species of the western grey kangaroo and it is believed that there are about 65,000 kangaroos on the island. You’ll notice the vast amount of kangaroos on this island as soon as you leave its villages.

The park entry fee into Flinders Chase National Park was $ 11 per adult and $ 16 for two consecutive days. Is it worth the money? Of course’ it’s not just for the kangaroos, the entire island is beautiful and worth visiting. 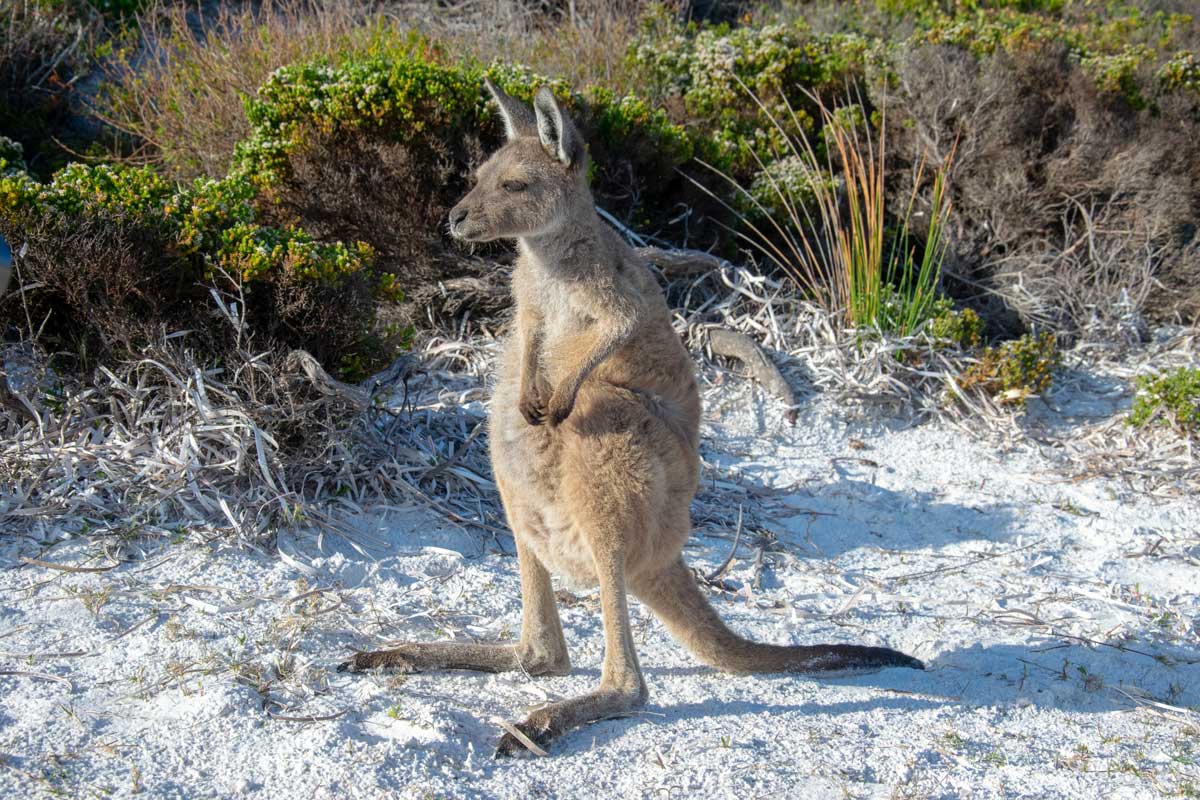 Another great place to see kangaroos is Cape Le Grand in Western Australia. You will not only be surprised by the breathtaking beauty of the beaches, but you might get the chance to see kangaroos hopping around on the white-sand beaches. But I have to say that I had more luck seeing kangaroos at Murramarang National Park and Kangaroo Island, to be honest. This just means that there were noticeably fewer kangaroos at Cape Le Grand National Park compared to other locations.

When we were visiting Cape Le Grand National Park for a day the entry fee was $ 13 per vehicle. We got a national park pass which is a good alternative if you want to see more parks in WA. 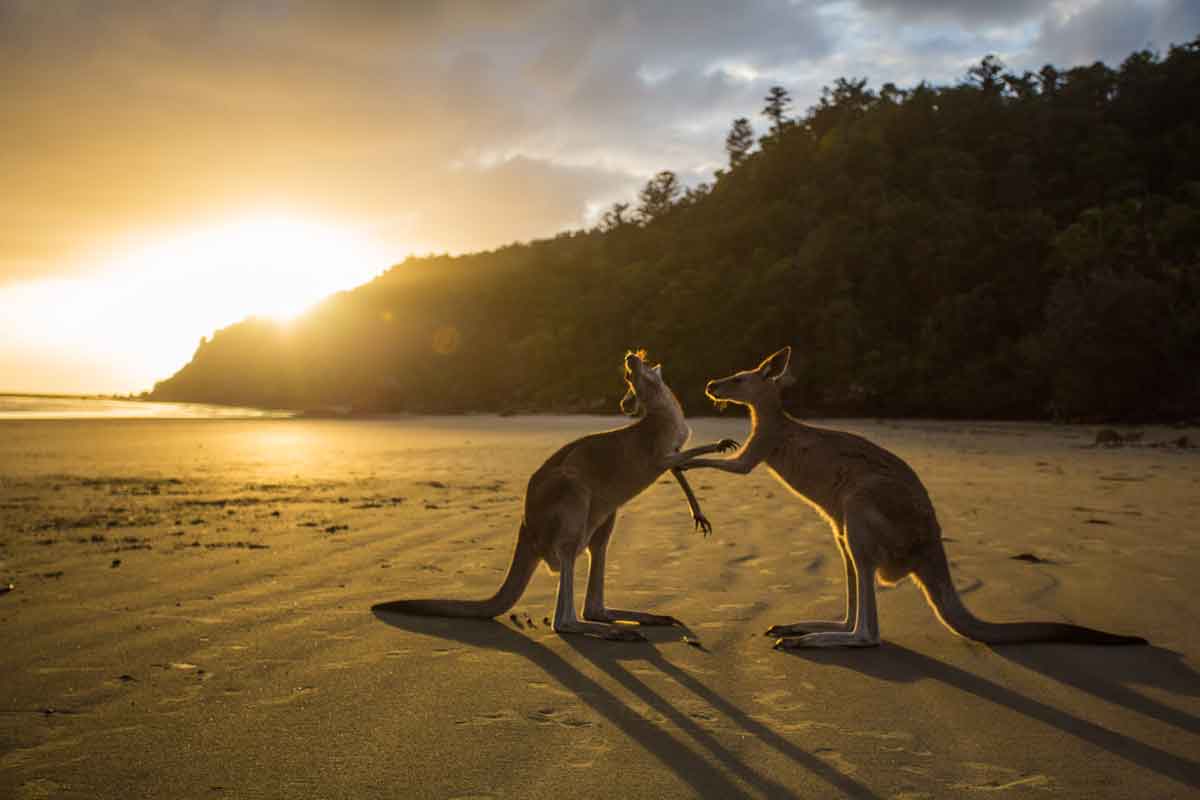 If you’re into kangaroos Cape Hillsborough is definitely a place to go. The national park is famous for its kangaroos on the beach during sunrise. It is, therefore, a very popular spot for wildlife photographers. It’s only about 50 km and 40 minutes away from Mackay, QLD.

At Cape Hillsborough kangaroos are actually wild. They roam around and go to the beach to look for food. This usually happens at dawn when they look for washed up seeds.

However, during the last few years, things have changed and more and more people are going to Cape Hillsborough. Kangaroos are being fed which often interferes with their natural diet and makes kangaroos sick. It still is a fantastic spot to see kangaroos. The setting on the beach is just breathtaking. If you’re after a great photo this place is worth visiting. You just don’t get the real wildlife experience because animals are so used to humans, they aren’t afraid of us. This makes it, as I said before, a great photo spot because usually kangaroos hop away if they see humans.

It was also reported that the Cape Hillsborough wildlife experience is not free anymore. But I haven’t been there lately so I cannot tell you much about prices. There have been rumors that visitors who don’t pay were denied access to the beach, but I couldn’t find a source that confirms that.

Should you go to Cape Hillsborough? Sure, it’s a great place. Don't just go there for the kangaroos. The national park is absolutely beautiful and you won’t regret visiting this place. I’d recommend finding the path up the hill, you’ll enjoy the view. 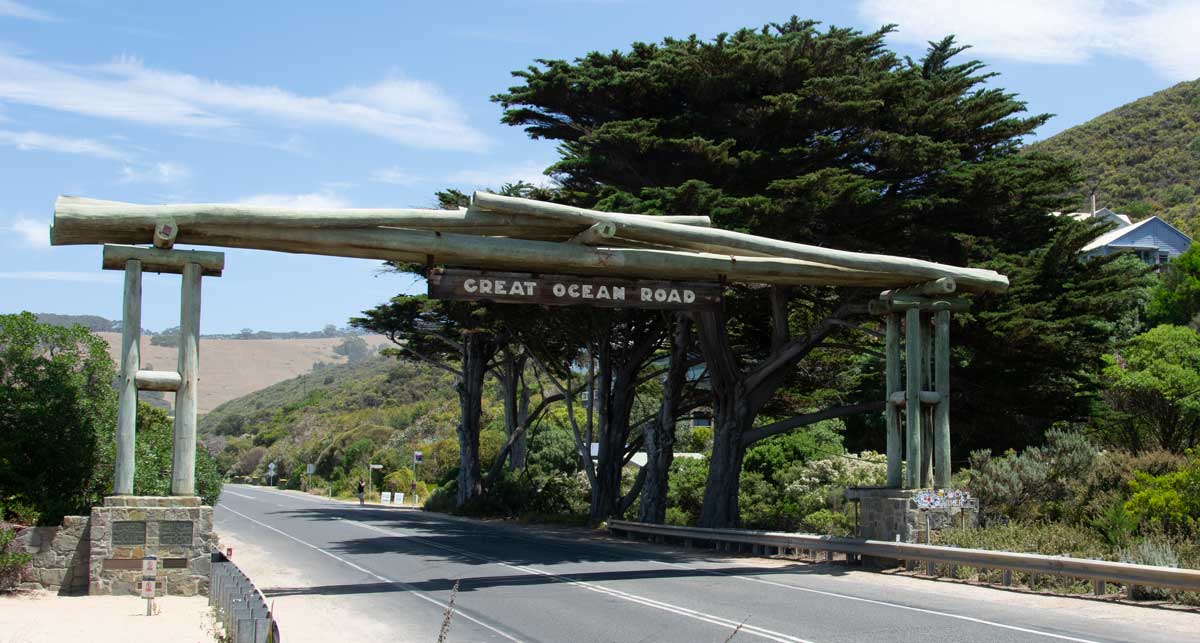 The Great Ocean Road is an experience on its own. It starts a few kilometers west of Melbourne at Torquay and finishes at Allansford near Warrnambool. Although I did not see many kangaroos, the Great Ocean Road was the first area where I had to deal with a kangaroo on the road in front of my car. Luckily, nothing happened and I was able to stop the car in time.

You’ll see them grazing on the huge fields where open forests are next to it. Bells Beach is known for kangaroos on the beach and you might spot a kangaroo at the Anglesea golf course. I had my “kangaroo on the road experience” near Port Campbell when we drove to Port Campbell after a beautiful sunset at London Bridge. It’s close to the Twelve Apostles so it’s always worth visiting this place.

If you want to read more about a fabulous trip along the Great Ocean Road, just read my article on that topic. The Great Ocean Road is famous for another very Australian animal: the koala. In the article, I also wrote about where you can find koalas.

If Cape Le Grand is too far away from Perth, just go to Yanchep National Park in WA. It’s another great place to see kangaroos close up. This national park is just 50 km away from Perth which takes about 45 minutes by car. Western grey kangaroos love grazing around the open fields. It’s a nice day trip from Perth, so go and get some meat and prepare it on the barbie. Enjoy a beautiful day, get close to kangaroos, and you might even see a koala.

Where you can spot kangaroos in Canberra

If you’re in Tasmania you should check out Narawntapu National Park. It’s great for native wildlife. You’ll see lots of kangaroos, wallabies, but also wombats and kookaburras. There are a variety of habitats and environments: forests, bass strait beaches, coastlines, mountains. This is another park which is definitely worth the visit. The park entry fee was $ 24 per vehicle per day.

If your time in Australia is limited and you still wanna see kangaroos Taronga zoo in Sydney may be an alternative. You can combine it with getting great shots of Sydney harbor. Taronga zoo is one of the best places to get great photos from a different angle and experience kangaroos. I wrote this article about feeding and petting kangaroos at Taronga zoo if you’re interested in that.

How many kangaroos are there?

This means that there is a high chance to see kangaroos when you’re visiting Australia. Just get in your car and go for a drive in the country. While you’re there you can visit dozens of beautiful beaches, and if you’re lucky a kangaroo will join you on the beach.

My Favourite Place to See Kangaroos

Do you know where and when I’ve seen the most kangaroos in my entire life? After a beautiful day at Depot Beach, we wanted to go back to our apartment in the evening after sunset. There is a huge field when you exit the national park along Mount Agony Rd and leave the forest just a few hundred meters before you arrive at the intersection at Princes Hwy. We pulled over and couldn’t believe what we were seeing: a field full of kangaroos! Just a few minutes later three other cars stopped right behind us and also watched those beautiful creatures.