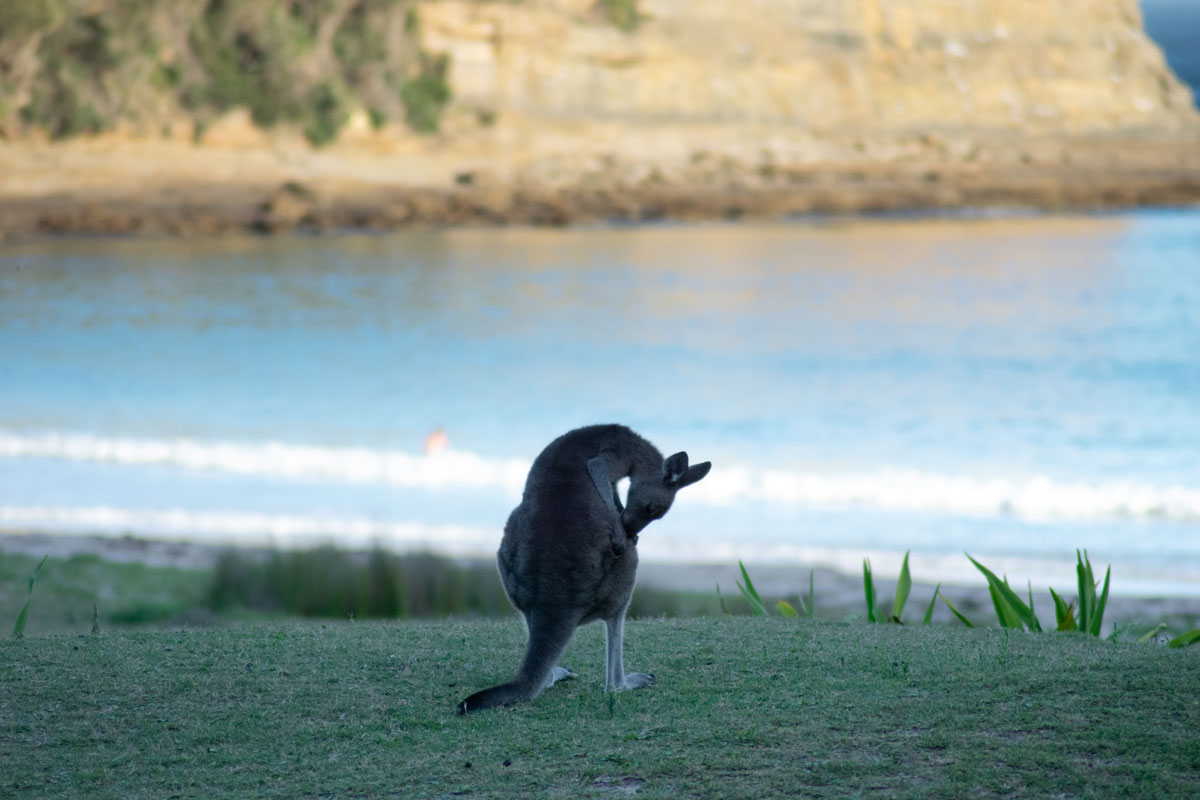 When you go to Australia, you will most likely see a kangaroo, a wallaby, or a wallaroo. I’m sitting here in Eden, New South Wales close to Ben Boyd National Park where I saw a couple of these animals today. Then I started thinking what’s the difference between a kangaroo, a wallaroo , and a wallaby? One of the most nerve-racking thoughts, when you see one of these animals, is the way to know which animal is in front of you. So I did a little research.

The easiest method is to distinguish them by size. Kangaroos can get up to 2 meters (6.5 ft) tall and are the biggest animals among the three. Wallabies are smaller than kangaroos and wallaroos. A wallaroo’s size is between a kangaroo and a wallaby, hence its name “walla-roo”. This is not the only difference. So let’s look into what other ways to distinguish between a kangaroo, wallaby, and wallaroo exist.

Have you ever wondered how you can distinguish between those three animals? When I was leaving the big cities of Australia, I saw lots of kangaroos, wallabies, and wallaroos but I did not know which animal was in front of me. This article should clear up any confusion about this topic. So next time when you’re in the bushes you know whether it’s a roo or wallaby.

But first, let’s get started with some similarities before we dig into the differences.

Kangaroos, wallabies are macropods. Did you know, that the super cute and adorable quokka is a macropod too? They are marsupials. Marsupial originates from the Latin word marsupium which means “pouch”. This means that female kangaroos, wallabies, and wallaroos have a forward-opening pouch which contains four teats. This is the place where a newborn called joey lives for a while. Check out this article about joeys to see what they look like.

They have lots of similarities, but let’s dig into their differences:

Kangaroos Are Taller Than Wallaroos And Wallabies

The easiest way to distinguish between wallaroos, wallabies, and kangaroos is in their size. This is because they can vary in size significantly. For example, the parma wallaby is less than one-tenth the size of a red kangaroo. When we compare their typical size, we come to the following conclusion:

I’ll give you an example:

The red kangaroo is the largest living marsupial. Its body and tail can get up to 2,4 meters (94 in) long! The largest red kangaroo ever seen has been 2.1 meters (82 in) tall. You will be surprised how tall they are when you are standing next to them. 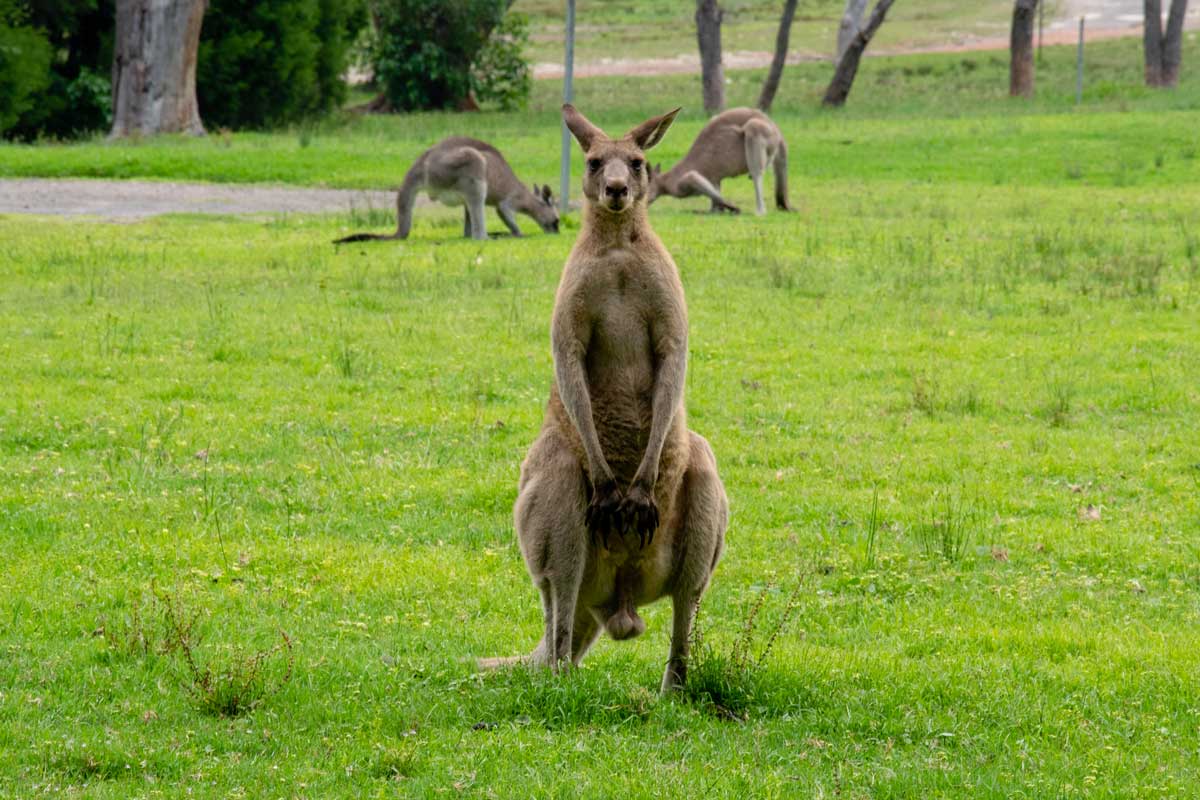 This comparison shows the most obvious difference between the three animals. However, comparing kangaroos, wallaroos, and wallabies based on their length is not always an easy task.  It can be hard to distinguish a wallaby and a roo based on their size because females are often considerably shorter than males. You should also consider that species like the western grey kangaroo and the eastern grey kangaroo vary in size significantly.

How tall do kangaroos get? Read this article to learn everything you need to know about a kangaroo's size.

Most Kangaroos Can Not Move Backward

Most kangaroos, wallabies, and wallaroos can not move their hind legs independently. A noticeable exception is the tree kangaroo which can move its back legs independently of one another and move backward. That’s a super practical skill for them because that’s how they climb down a tree. Tree kangaroos are climbers rather than hoppers. So if you see a kangaroo moving backward it’s most likely a tree kangaroo.

Kangaroos: Their Legs Are Designed To Be Fast

Despite their physical differences in size, their legs could tell us more about whether it’s a kangaroo or a wallaby.

Due to their natural habitat, the legs of kangaroos are designed to be fast on flat ground. This means that knees and ankles are set wide apart, in other words, the legs are longer between the ankles and knees.

In contrast, wallabies are more often found in bushy forest areas where speed is less important than maneuverability. Therefore, wallabies usually have shorter legs which improve their agility.

Wallaroos are once again somewhere between kangaroos and wallabies. A wallaroo prefers to live in the rolling countryside or in mountainous areas where it can find caves, rock formations and large overhangs where they can seek shelter during days with intense heat. They are, however, not such good climbers like wallabies. Hence, the legs of wallaroos are designed to meet these criteria.

Their Habitat Tells Us Much About Them

I’ve just described that kangaroos have feet made for open planes and wallabies prefer to live in forests and montane areas. This brings us to the next method of how you can tell the difference between wallabies, wallaroos, and kangaroos.

Based on their habitat it is easier to clarify which animal is in front of you when you’re traveling in Australia.

Where you can find wallabies:

You can find wallabies in forests, low-density forests with plenty of sunlight and limited shade but a dense layer of vegetation on the ground, or open, low-growing woody vegetation. Often, a wallabies habitat is in the mountains or hilly areas. You won’t find wallabies in the central part of Australia. They’re more likely in relative proximity to the coast.

Where you can find kangaroos:

Kangaroos live in a wide variety of habitats. But they are rarely found in areas without shade. They like open woodlands as well as grasslands and areas with much rain and forests, but species like the red kangaroo can survive with little rainfall. You will find kangaroos in most areas in Australia.

Where you can find wallaroos:

A wallaroo needs areas with shade to protect against the heat during the day. That could be rocky hills, caves, or rock formations with large overhangs. They also like water supplies like streams in their home range. They can be found in many coastal areas as well as in the center of Australia.

Tell Them Apart By Looking At Their Teeth

There are even more differences between a wallaroo, a kangaroo, and a wallaby. Let’s continue with their teeth.

You can take a look at their teeth to tell whether it’s a ‘roo or wallaby. Good luck! This may be the most complicated method to tell them apart. This route is primarily relevant for scientists, but we’re here to learn new things so let’s dig into it.

Once again, due to their natural habitat, a kangaroo’s teeth are made for the food they find in open terrains. Their teeth have evolved to be perfect at slicing up stalks of grass. Their front teeth are perfect for cutting the grass.

Wallabies, in contrast, primarily live in forests or bushy areas where they can find grasses, roots, tree leaves, and weeds. That’s why a wallaby needs flat back teeth. It also doesn’t need big front teeth like a kangaroo. Their flat back teeth are perfectly made to grind and crush leaves.

There’s another difference when we look at their teeth: kangaroos and wallabies replace their teeth throughout their lives. While the kangaroo sheds its premolars, a wallaby keeps them.

So, let’s go right back to the beginning. The question was, Kangaroos vs Wallabies vs Wallaroos? Now you know the details behind my simple answer that kangaroos are the largest among the three. Get out there, have some fun and don’t forget to remember the other differences like their feet, weight, and teeth when you’re in Australia!