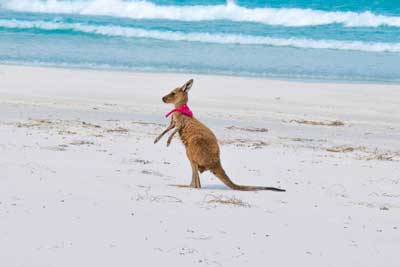 It’s one of the cutest moments when a young animal looks out of its mother's pouch.

A joey is a young marsupial. Marsupials are not completely developed when they are born and live in their mother’s pouch until they are fully developed. Infants of animals like kangaroos, koalas, opossums, and wombats are called joey.

Marsupials are typically found in parts of Asia and Australia as well as in South and Central America.

What is a Kangaroo Joey?

Young kangaroos are called joey. They live in their mother’s pouch where they find shelter and milk until they are fully developed.

How does a joey get into the pouch?

It usually takes between 30 to 36 days until a joey is born. When a baby kangaroo is born, it is just a few centimeters long (about the size of a jellybean). It is also blind and hairless and can barely crawl. The joey uses its better-developed forelegs to climb from the mother’s birth canal through the fur into the pouch. Prior to the joey’s birth, the mother licks the path on the fur on its abdomen to make sure the newborn finds the way into the pouch. This climb into the pouch takes between three to five minutes.

Yes, many kangaroos can delay birth. There is only one exception which is the western grey kangaroo which can’t do that.

Many kangaroo moms can suppress the development of the joey before it is born. This is called embryonic diapause and means that the female kangaroo is able to delay birth. This can be useful if conditions to give birth are unfavorable - for example in drought conditions and if food is hard to find.

They also delay birth until their previous joey has left the pouch. This is because there is only enough space for one joey to develop inside the pouch. If the female kangaroo loses a joey, it is able to give birth to a new joey a few weeks later.

There is only one exception. Female western grey kangaroos do not know something like embryonic diapause.

What does a joey do inside its mother’s pouch?

Once the joey arrived in the pouch, it attaches itself to one of the teats in the pouch. The mother is capable of producing milk with nutrition based on their young’s needs. A female kangaroo can take care of multiple joeys.

A joey is unable to regulate its own body temperature. Inside the pouch, the joey is kept warm. Young kangaroos are dependent on the temperature in the pouch which is regulated by their mother.

How long does a joey stay in the pouch?

You might be thinking when does a joey leave the pouch?

A joey stays in the pouch as long as it needs protection and is not fully developed. This takes about 6 months until they leave the pouch for the first time. Inside the pouch, joeys are protected from threats such as eagles and dingoes. They are absolutely tiny and helpless creatures when they are born.

When does a joey leave the pouch?

It takes about 6 months until a joey is ready to leave the pouch for the first time. Then, it already looks like a cute kangaroo. This means that it can see, has its own fur and its arms and legs are developed.

When the joey reaches an age of about 8 months it starts to leave the pouch for good. However, the mother’s job of caring for their young is not over yet. Joeys continue to suckle until they reach about 12 months of age.

The mother is able to provide the milk based on the needs of the joey. A female kangaroo can take care of two living joeys. One of which is attached to a teat and another joey which is still suckling. This means that the mother can provide milk with two different types of nutritional content.

A joey uses its time outside the pouch to practice valuable skills. It improves its jumping and hopping skills and learns what it can eat.

Mother and young communicate when the joey gets either lost or strays away too far to find the way back. The joey gradually becomes more independent of its mother until it finds its place in the mob.

What is a Koala Joey?

A koala joey is a young koala that lives in its mother's pouch.

Not only young kangaroos are called joey. Joey is a name for young marsupials. Besides kangaroos, other animals like the closely related wallaroo and wallaby, as well as koalas and opossums, have their young called joey.

Koalas are one of Australia’s most iconic animals. Did you know their young are called joey too? Like kangaroos, female koalas have a pouch where their newborn develops after its birth.

The behavior of koala joeys is very similar to the behavior of kangaroo joeys. Koala joeys are born after about 35 days of pregnancy. Like a young kangaroo, the koala joey starts its life blind, hairless, extremely tiny, and most parts of its body are not well developed. It uses its better-developed forelimbs and claws to climb into its mother's pouch. Quokkas are small macropods (like kangaroos, wallabies, wallaroos) and are famous for being the happiest animal on earth and living on Rottnest Island off the coast of Western Australia. Female quokkas give birth to joeys after one month of pregnancy. The newborn attaches itself to a teat in its mother's pouch for about six months and it finally leaves the pouch about eight months after its birth.

The quokka joey is typically born around February to April and remains in the pouch until August or September. Click here to read my article on quokkas.

Do Joeys poop in the pouch?

Yes, joeys actually poop in the pouch. How does the mother clean the pouch? The mother cleans the pouch by licking it out. Kangaroos are extremely agile and are able to put the snout into the pouch where they use their tongue to efficiently lick out any dirt from the pouch.

Do male kangaroos have pouches?

Unlike female kangaroos, male kangaroos do not have pouches. There is just no need for them because they cannot produce milk.

Are there any other names for kangaroos?