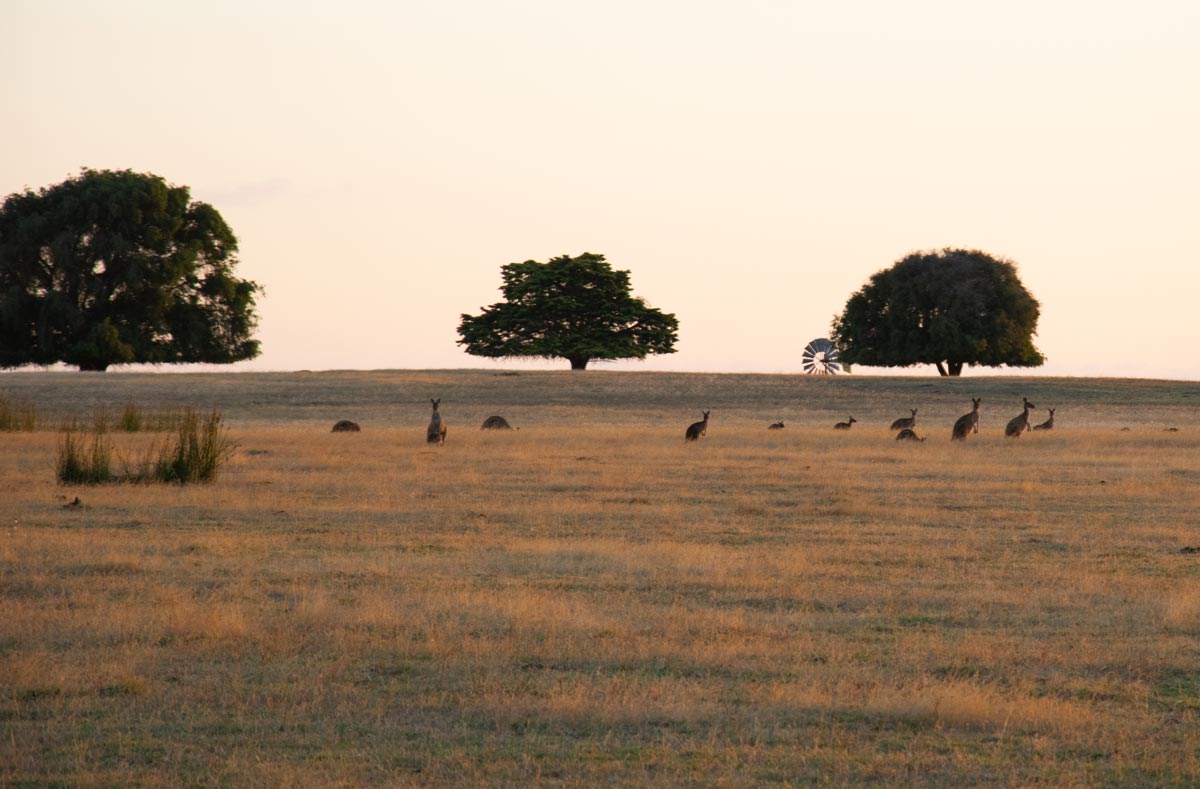 Male kangaroos build a reputation within the mob to establish their right to mate with females. Kangaroos breed when there are sufficient resources available to support the female kangaroo and its joey. Females are capable of embryonic diapause which is a method to delay birth until conditions are favorable.

How do kangaroos reproduce - a complete guide. I’ve recently seen a joey looking out of its mother's pouch and I was deeply impressed. That got me thinking about what happens in the time between mating until a joey is born?

I’m going to show you how kangaroos reproduce and what happens until a joey is born.

How Do Kangaroos Mate?

Before kangaroos are ready to mate, male kangaroos have to fight to get access to females.

Only the strongest kangaroo will be given access to the females of a mob.

How kangaroos fight for females

You may have heard that kangaroos (like wallaroos and wallabies) are excellent fighters - they are good boxers and also use their claws. They do not only do that to defend themselves, but they also use these techniques to determine their position in the mob. It is used to established dominance because the most dominant males are most likely to get access to females.

They are polygynous and ritualized fighting determines which male gets exclusive access to females. During these boxing matches, they hit each other with their forepaws and use their feet to kick the opponent. They try to push the opponent over.

Kangaroos only breed if the conditions are favorable. Conditions such as drought and when food is hard to find suppress the fertility cycle of most female kangaroos. This is a clever mechanism because newborn joeys would most likely not survive these harsh conditions.

Scientists believe that just about 50 % of young kangaroos reach the age of two years and get older in perfect conditions, during drought juvenile mortality can be up to 100 %.

If conditions are favorable, kangaroos are basically pregnant all the time. Many female kangaroos can to delay birth until their previous joey has left the pouch. This is called embryonic diapause.

What is embryonic diapause?

The ability to delay birth is called embryonic diapause. Female kangaroos can completely stop the development of their young embryo and the normal gestation period is extended until the previous joey has either left the pouch or died, and outside environmental conditions are favorable to giving birth.

Western grey kangaroos do not have embryonic diapause

Males use their smell to determine which female kangaroo is sexually available. Then they stay close and start mating. It is not always the alpha male of the mob that gets females pregnant. Some male kangaroos do take the chance when the alpha male is not watching. This also benefits genetic diversity.

Kangaroos mate the typical way. Female kangaroos release an egg from their ovary and after mating, it may become fertilized by sperm - thus egg and sperm unite.

In contrast to other mammals, no placental connection is formed. Kangaroos have a yolk-type placenta and the marsupial egg has to consume the yolk - once the yolk is consumed it needs to be born. That’s why marsupials have ultra-short pregnancies and give birth to blind, extremely immature, almost embryonic, young joeys. They have to complete their development in the pouch attached to their mother’s teat. This means that their pregnancy is only about 30 days long.

Birth of a Joey

Before birth, female kangaroos start to clean the pouch. This starts about 24 hours before birth and they simply put their snout in the pouch and start to lick out the pouch to clean it.

To give birth, the female kangaroo sits down and the joey pops out of the birth canal. After 30 days it is barely developed and uses its instincts and better-developed forelimbs and claws to find the way into the pouch. It’s not a long way but it is hard work for the blind, extremely tiny and hairless young joey. It is noteworthy that the fetus starts to move its forelimbs similar to movements required to crawl into the pouch about three days prior to birth. Its hindlimbs are barely developed and are only buds. Its color is pink and only the size of a jellybean. After its birth, the climb into the pouch usually takes between three to five minutes.

Once the joey arrived in the pouch, it attaches itself to one of the teats where the mother produces milk based on Joey’s needs for the next few months. I’ve written an entire article on joeys, which also includes a cute picture of a domesticated joey on the beach (click here to read it).

After giving birth to their joey, females are ready to mate again. This is why kangaroos are practically pregnant as long as they are fertile.

Becoming a grown-up kangaroo and wallaroo

I found this amazing website that shows pictures of the development of joeys. They started taking pictures from day one when the joey was born until it was eight months old and gets in and out of its mother’s pouch.

Joeys undergo incredible development. In the beginning, you can barely imagine it’s a wallaroo. Did you know that kangaroos and wallaroos have many things in common? If you want to read more about the difference between a kangaroo, a wallaroo and a wallaby read my article on that topic.

To become a grown-up kangaroo, a joey only drinks milk for the first few months in the pouch. Inside the pouch, a joey is protected from threats such as dingoes and eagles. It will take about six months until it starts to look out of its mother's pouch.

Joeys first act clumsily when they leave the pouch for the first time, but they’ve got time to exercise and eventually they get better and better. Joeys practice hopping, jumping, and learn what they can eat. They finally leave the pouch for good at about 10 months, but they  continue to suckle until they are about 18 months old.

Then, the cycle starts again.

Do joeys poop in the pouch?

Yes, joeys poop and pee in the pouch. It can get smelly sometimes and therefore the mother cleans out the pouch by licking it out from time to time.

Do male kangaroos have a pouch?

Unlike female kangaroos, male kangaroos do not have a pouch. They cannot produce milk and they, therefore, do not need a pouch.