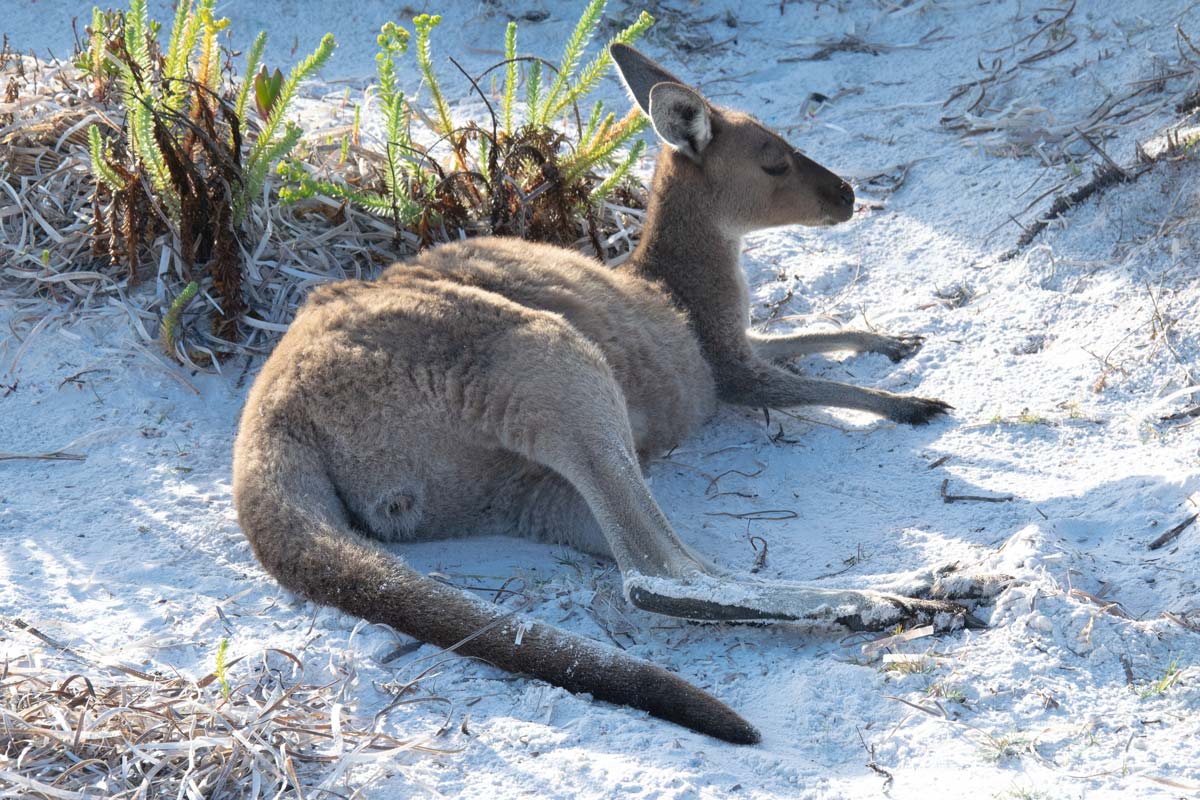 I’ve recently been on a breathtaking beach in Australia where kangaroos hop around all day. This is not a typical behavior because kangaroos are nocturnal and crepuscular animals. That got me thinking how and when do kangaroos sleep?

Kangaroos sleep in a horizontal position similar to humans. A sleeping kangaroo is lying on the ground on its side with its forelimbs supporting its head.

When do kangaroos sleep?

Kangaroos are mainly nocturnal animals. They sleep during the day and are active at night.

Kangaroo species like the red kangaroo, eastern grey kangaroo, western grey kangaroo and the antilopine kangaroo are mainly nocturnal and crepuscular animals. This means that they are most active during the night and at periods of dusk and dawn. Kangaroos usually use the day to get some sleep and rest.

Kangaroos are native to Australia where temperatures during the day can get unpleasant for both humans and animals.

The red kangaroo is mainly active at night

The red kangaroo which is native to the dry and hot central part of Australia is mainly nocturnal. They rest during the day where they have a place in the shade. They are active starting from dusk until dawn. You might see a red kangaroo during the day but they are much more active during the night, in the late evening and the early morning.

You might see eastern greys and western greys grazing during the day although these animals are nocturnal and crepuscular.

Where do kangaroos sleep?

Kangaroos use places to rest where they are protected from the heat of the sun. They actively look for places where they can rest in the shade during the day.

Red kangaroos find small bushes or mulga trees that are native to arid outback areas of Australia. They provide the shade they need during the day. Red kangaroos typically avoid outcrops or caves.

Eastern grey kangaroos and western grey kangaroos sleep during the day in bushland or woodland close to open grasslands. They rest and eat in bushland and woodland areas during the day, while they move to open grasslands to feed at dusk. There you can see them in their large mobs. They usually spend about six to ten hours grazing per day, while they move about and rest the remaining time.

Chances to see wild kangaroos in deep sleep are very low. Kangaroos have a good sense of when predators are around and they won’t fall into a deep sleep. They are experts in finding concealed places so you will rarely see a kangaroo in its natural sleeping position.

Kangaroos actually like comfortable sleeping positions. They can use their claws to dig a little bit in the ground and remove the hot top sand. They will then lie down on the cooler dirt.

How long do kangaroos sleep?

Do kangaroos sleep a lot?

Kangaroos must watch out for predators and therefore cannot simply sleep for hours without any interruptions like humans. They do have a deep sleep from time to time but they typically spend their day grazing and resting.

Scientists believe that kangaroos spend about six to ten hours a day grazing, which is interrupted by other activities such as resting, moving about, mating, and fighting.

Do Kangaroos sleep with their eyes open?

Do kangaroos sleep in trees?

Some kangaroos actually sleep in trees. They are called tree kangaroos, which is a perfect name because it perfectly describes their habitat and behavior.

How do tree kangaroos sleep?

Tree kangaroos are very special kangaroos and look totally different than their bigger relatives like the red kangaroo and the eastern and western grey kangaroo. Tree-kangaroos are marsupials just like their larger relatives but they have adapted for living on trees. They can be found in northeastern Queensland and the tropical regions of New Guinea and they are the only true macropod living in trees.

Tree-kangaroos sleep about 60 % of the time and just sleep in a tree wherever they feel comfortable.

Do kangaroos sleep standing up?

Kangaroos do not sleep in an upright position. Their sleeping position is, in fact, very similar to humans. When kangaroos want to sleep, they lie down on the ground, preferably in the shade. They prefer to lie on their side or their back and they use their forelimbs to support their chest and head.

Summary: How Do Kangaroos Sleep

Kangaroos are mainly nocturnal and crepuscular animals. This means that they are most active at night and the periods of dusk and dawn. Eastern greys and western greys are also active during the day because their habitat is not in the driest and hottest parts of Australia. However, you will see most kangaroos at dusk and dawn.

Yes, kangaroos can definitely sleep. Kangaroos usually sleep during the day in a horizontal position with their head tilted up. They also close their eyes while they are sleeping.