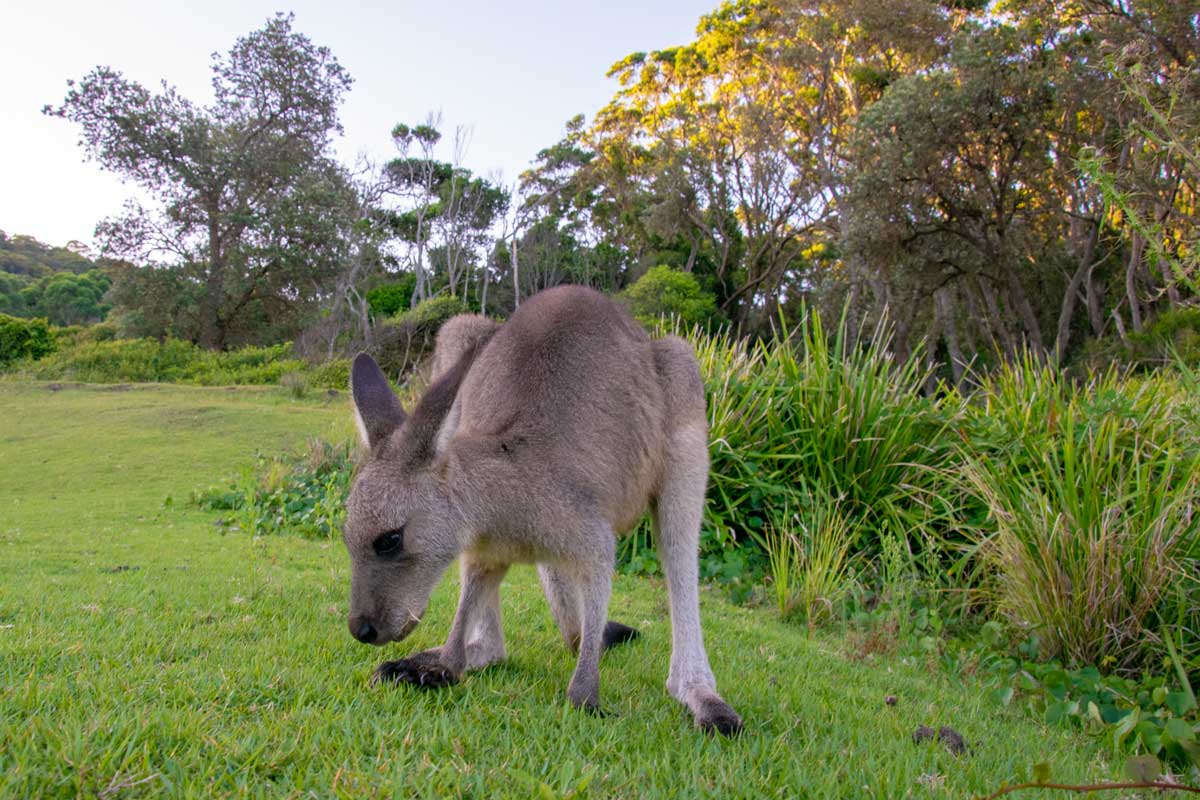 It is a pretty impressive experience when you’re standing next to a kangaroo in the wilderness. Some are extremely small, and some are taller than most humans on this planet. I’m sitting here in Murramarang National Park with lots of kangaroos next to me and I was wondering how much does a kangaroo weigh? So I did a little research and came to the following conclusion:

In short, an average adult kangaroo weighs between 35 - 90 kg (77 - 198 lbs). However, there is a huge difference in weight between males and females. Males can weigh up to twice as much as females. Additionally, different kangaroo species vary in weight, size, and looks.

Obviously, the weight depends dramatically on the size of the kangaroo and the species of the animal, so I’ll include a bunch of examples later in this article. As a general rule, you can expect a kangaroo to weigh about 3 - 90 kg (6.6 - 198 lbs).

Grown-up kangaroos weigh definitely more than 3 kilos, whereas joeys, a few months after birth, only weigh a few kilos. I’ve compiled a list of different marsupials to show their weight:

As you can see, there is a huge difference between males and females when it comes to their weight. This phenomenon is called sexual dimorphism and it’s not limited to an animal's weight. For example, many male kangaroos reach almost twice the size of females. In general, muscle mass makes up approximately 80 % of the body weight.

How Much Does a Wallaroo and a Wallaby Weigh?

Wallaroos and Wallabies are very similar and closely related to kangaroos. This means we can look at their weight too.

I’ve picked some smaller and larger wallaroos to compare their weight to kangaroos:

That’s a huge difference compared to kangaroos, right? But keep in mind that tammar wallabies only are about 45 cm in height.

How Does The Weight Of Kangaroos Impact Humans?

Although kangaroos are very friendly animals, they can become a real threat to humans. A mother will do anything to protect its baby kangaroo (joey) and, as a piece of general advice, don’t make kangaroos angry at you. They are not just quite heavy, their feet are strong and kangaroos can be good fighters. Especially male kangaroos are trained boxers.

What Happens When You Hit A Kangaroo With A Car?

Now that we know that kangaroos can get quite heavy (up to 90 kilos!) you should definitely avoid hitting them with your car. We hired a Toyota RAV 4 SUV when we went to the country and we felt much safer compared to an average hatchback. Luckily nothing happened but we’ve seen some kangaroos on the street, though. Unfortunately, some of them already became victims of cars. Others were just standing on the streets but we managed to get out of their way and nothing happened.

Once you’ve been to Australia’s country you might understand why big SUV’s are so popular. Many people have a kangaroo bar installed on the front of their vehicles to protect it during collisions with kangaroos. In fact, kangaroos account for about 60 % of all collisions between vehicles and animals. However, it is still dangerous to hit large animals even when you’ve fitted a roo bar on the vehicle. This is because of their weight. The impact force is gigantic when you hit a kangaroo at high speeds.

What Should You Do When You Hit A Kangaroo With Your Car?

The likelihood to see a kangaroo or wallaby on Australia's roads is pretty high, especially at night, dusk, or dawn. Often kangaroos won’t move when they see your headlights and then you and the roo are in trouble.

If the worst things have happened and you’ve hit a kangaroo, there are a few things you should do:

You see, it's definitely a thing you should avoid under all circumstances. The best thing is to reduce your speed between sunset and sunrise.

You will not only save an animal’s life but due to their enormous weight, these preventative measures also prevent you from becoming injured.

How Much Does A Joey Weigh?

Kangaroos can weigh up to 90 kg when they are grown-up adults. But you won’t believe how incredibly small and light they are after their birth. A new-born joey only weighs approximately 0.8 - 2 g and is the size of a jellybean after its birth. Then the joey climbs into its mother's pouch. There it stays for a few months after it first sees the light of day. Check out my article on joeys to learn more about their weight and size and see what they look like.

Don’t underestimate kangaroos, wallaroos, or wallabies. Males can weigh up to 90 kg (198 lbs) and are therefore heavier than some humans. Females are typically much lighter than males, but they still weigh up to 40 kg (88 lbs). Joeys weigh approximately 0.8 g when they are born and climb form the birth canal to the pouch. Due to the weight of adults, please pay attention when you’re driving at dusk, night, or dawn.

Do You Want To Learn More About Kangaroos?

Read my article on: What's the difference between a kangaroo, a wallaroo, and a wallaby?