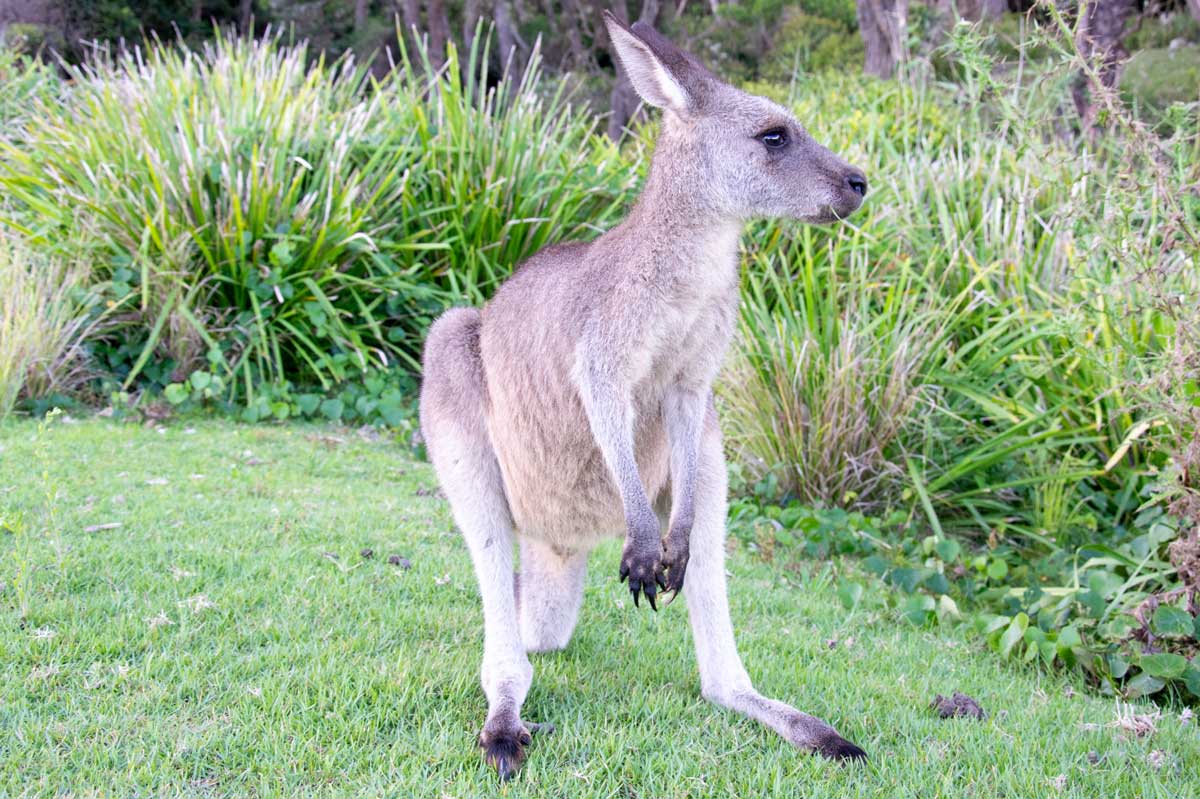 I’ve recently visited several national parks in Australia and saw a few young kangaroos next to their mother. That got me thinking what is a young kangaroo called?

Why Are Young Kangaroos Called Joey?

Kangaroos are marsupials, a word which originates in Latin and means “pouch”. Kangaroos aren’t the only animals with pouches and so every young marsupial is called a joey.

How a Joey is Born

The joey pops out of the birth canal which is close the the tail and then crawls through its mother’s thick fur into the pouch. This can take between three to five minutes. Check out this article to see how kangaroos reproduce.

Female red kangaroos and female eastern grey kangaroos actually can delay giving birth to their young. This phenomenon is called embryonic diapause. This practice is often used when the female kangaroos couldn’t take care of their young in the predominant environment. For example, during extreme heat and extreme drought, the female kangaroo can barely survive on its own, raising up a joey would make life worse. Additionally, chances that joeys survive these harsh conditions are very low. Therefore, red kangaroos and eastern grey’s can stop the development of their young.

What is a Young Wallaby Called?

Kangaroos and wallabies are very similar animals. They are not the same, though. Young wallabies, being marsupials like the kangaroo, are called joey as well. Check out this in-depth article to learn more about the amazing differences between a kangaroo, a wallaby, and a wallaroo.

Additionally, wallaroos are very similar to kangaroos and wallabies. Their size is somewhere between a kangaroo and a wallaby. Again, their young are called joeys.

Although many kangaroos can breed all year round, there are times when it’s more likely to see a joey with its mother.

Red kangaroos breed all year round, but they tend to give birth to most joeys in Australian spring and summer.

Eastern grey kangaroos breed all year round and give birth to most joeys in summer.

Similarly, western grey kangaroos can continuously breed but there is a peak in reproduction in spring and summer.

In contrast, the antilopine kangaroo (or antilopine wallaroo) is a seasonal breeder. Breeding occurs at the beginning of the wet season which is usually in December.

Newborn joeys are absolutely tiny creatures. They are as little as a jellybean and only weigh about a gram. It takes about eight months until a joey starts to look out of its mother's pouch. Then, the joey is well-developed and ready to explore the world. It then starts to hop out of the pouch and learns how to move and what to eat. Joeys still continue to go back into their mother’s pouch for a few months.

So if you want to see a female kangaroo with a joey in the pouch you should look out for them about eight months after spring or summer, for example around July to October.

What Young Animals Are Called Joey?

Kangaroos aren’t the only animal whose young are called joey.

I’ve researched the other animals which are commonly known and whose young are called joey:

Where You Can See And Hold Joeys 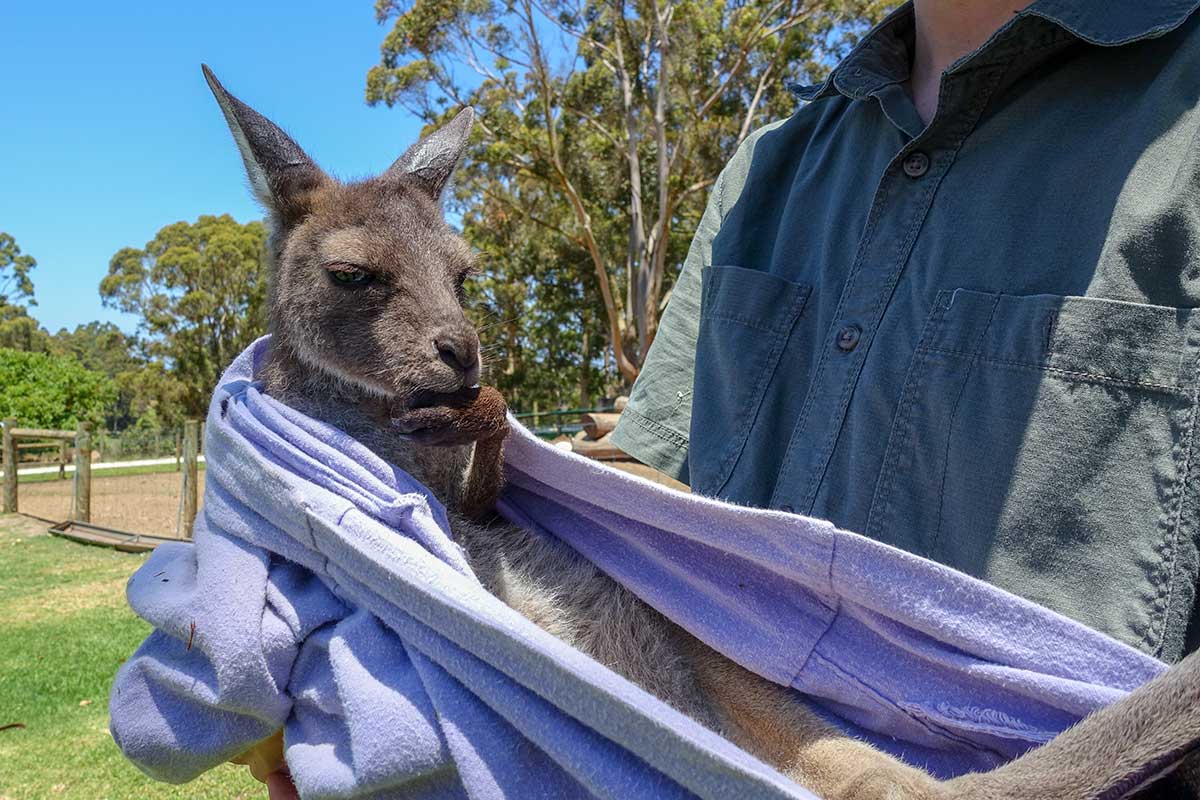 You might be thinking where you can actually pet and feed joeys? I would not recommend touching kangaroos in the wild. There are many tame kangaroos out there, especially in touristy areas. But you should never try to touch, feed, or hold a joey.

The mother will not like it and will see you as an enemy or predator. Female kangaroos will do everything they can to protect their young, and you should not forget that kangaroos are excellent fighters. Even young kangaroos train boxing, and adult kangaroos can seriously injure humans.

So if you want to pet and feed joeys please do that in a zoo, animal sanctuary or wildlife park. The staff will only allow you to do so if it’s safe for both humans and kangaroos, so you cannot do much wrong with this approach. If you want to feed and pet kangaroos check out my article where I researched the best places where you can do exactly that.

Also please don’t forget to not feed kangaroos in the wild. The diet of a kangaroo is totally different from the diet of us humans and what might be healthy for us might hurt the kangaroo. Even vegetables that are extremely healthy for humans can be dangerous to kangaroos. Don’t rely on the instinct of an animal, they sometimes try to eat everything they can.

We’ve learned that young kangaroos are Joeys and kangaroos are often called “roos” - but there are special names for female and male kangaroos:

What is a female kangaroo called?

A female kangaroo is called a Doe, Flyer, or Jill.

What is a male kangaroo called?

A male kangaroo is called a Boomer, Buck, Jack, or Old Men.

Where does the name Kangaroo come from?

Linguists confirmed that the word kangaroo derives from “Gangurru” which refers to kangaroos in the language of the Guugu Yimithirr people who lived on Cape York Peninsula in Far North Queensland. When the HMS Endeavour was beached in this region the crew came in contact with the local Aboriginal people. Then the name was first recorded as “kanguru” on July 12th, 1770 in the diary of Sir Joseph Banks.